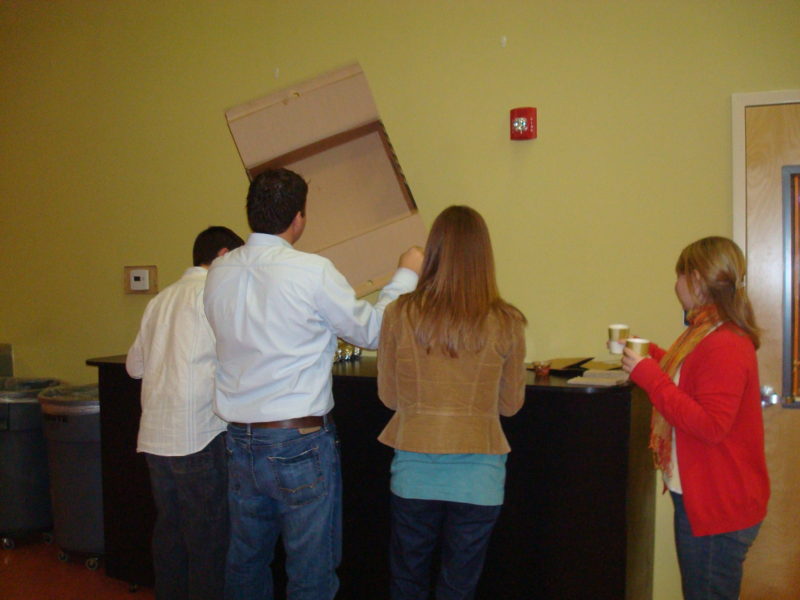 I remember a conversation with my middle son about filling out one of those “free dinner” cards that you often see sitting in the lobbies of restaurants or the countertop at a gas station.  I think he was halfway through filling one out when I told him that if he dropped it in the box, we would be forced to not only (a) eat the dinner, which would undoubtedly be a selection from the appetizer menu, and (b) listen to an old man wearing polyester tell us how to Secure Our Financial Future by investing with his company, and (c) because I’m such a pushover I would sign over my life savings so he could run off to Jamaica while I sat in the restaurant finishing my cheese fries (now with real Bacos!).

Nonetheless, I’m a sucker for those bona-fide, actual-restaurant-sponsored fishbowl things, where you drop your business card in to win a free lunch.

In a really big way.

Back in December, the Meece’s Pieces small group (holla!) went to Chipotle in north Durham to grab some Mexican food.  First time I’d ever been.  I liked it.  They have free-range meats, which are like Free Will Baptists, except their hairstyles aren’t as funny.  As I was going through the line, I dropped in the card, and last week, I got the call:

For the entire office.

Poor, poor Andi.  I’m sure she thought, “Business card from a church office.  How many free burritos could that be, like four?”

Yep, yesterday was our monthly staff meeting, where everybody shows up and new people are frequently hired during bathroom breaks.  It’s the meeting where we should all wear name tags, the meeting where we realize with a staff our size we could be All-Time Champions of a national church staff tug-of-war.  (Except for Saddleback.  I hear Rick Warren is pretty muscular under those Hawaiian shirts.)

Anyway, thanks to Andi and our new friends over at Chipotle on Erwin Road.  Lunch was awesome, and you guys were super-kind to accommodate us.  Summit peeps, go get a burrito.  And take your business card.