Frank Capra was a Liar 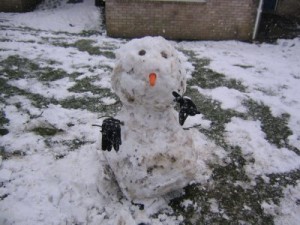 For my out-of-state readers, let me bring you up to speed by telling you that the Triangle area received anywhere from 2 to 6 inches of snow on Monday night.  (Without that info, this story would be lame.  Or at least lamer.)

I don’t understand the magic of snow.  Don’t get me wrong – I like snow.  I like watching it fall.  I like seeing it blanket the ground.  I really dig it when we get one of those “wet snows” where the trees are covered with the stuff.

But once the snow has fallen, I can’t understand what happens to the Hollywood ideal of snow.  I’m talking the It’s a Wonderful Life George and Mary walk through the streets, Elf Central Park snowball fight, White Christmas with Bing Crosby…um…okay, I’ll admit I’ve never ever seen White Christmas, so I don’t know what they did.

But the point remains, something happened between Hollywood snow and the snow around this joint.

Yesterday, for example, my kids got all bundled up and headed outside to recreate some Capra-esque moments.  It was all so clear in my head: they would build a veritable snow-family with the little stick arms waving to passersby.  They would take their wooden sleds and slide gracefully down the hill, accompanied by our beautiful bounding black lab (which we don’t have, but would magically appear).  Then they would all come inside for hot cocoa as we warmed ourselves by the fire.

Here’s reality: they had a snowball fight with snow that was so tightly packed they might as well have been throwing ice cubes.  There were at least six concussions by the time it was over.  There wasn’t enough snow to build a snow-little-person, much less a whole family.  They took their four dollar plastic discs – which looked more like garbage can lids – and went down the little hill in our backyard, blazing along at a speeding six inches per hour.  The closest we came to a black lab was the moment when I’m pretty sure they slid through poo from the neighbor’s dog.  And as for that hot cocoa – the little rascals were so funkified that we cracked the door a few inches and tossed it out in styrofoam cups.  Oh…and our gas logs apparently ran out of gas.

I think I’ve figured out that they don’t have leaves, dirt, grass, or even ground in Hollywood snow.  You never see a snowman with a wayward leaf sticking out of it’s head.  There are never muddy ruts down sledding hills, and snowsuits don’t drip dry in the laundry room, leaving big brown puddles beneath them.  And on the day after, you never see brown sludge on the side of the road as you drive by in your salt-encrusted car.

So yeah, it’s another North Carolina snowfall where I’m left disillusioned and dreaming of a pristine, poo-free experience.  Happy flippin’ snow day to you.