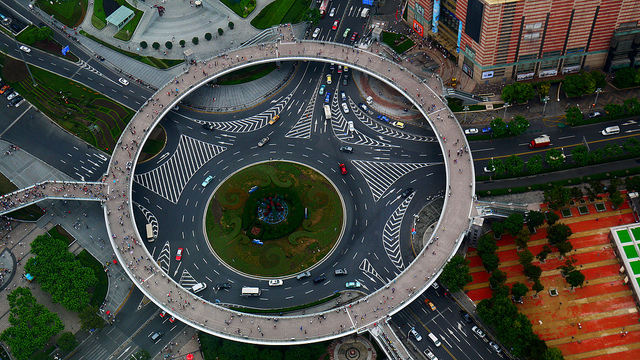 Yesterday on the commute to work, I heard a story on the radio about a German woman who got stuck in a roundabout, which is a transportation term that literally means, “Our city is too cheap to invest in red lights.”

It seems that this elderly lady made her way to the inner lane of the roundabout … and couldn’t get out.  She made at least fifty laps around until a police officer (“kopperschnitzel” in German) came to her rescue, turned on the siren, and stopped traffic so she could get to her intended destination (Straussenheimendört Lane, I think).

Now, aside from the comedy-intensive parts of this story which remind me of something out of European Vacation (“Look kids!  Big Ben!  Parliament!”), isn’t this the way most of us live our lives?  We jump in the flow of the insanity we call our world, and rather than occasionally scooting out to the calm side streets, we just keep going in circles.  By the time we realize we want to get out, we find that it’s almost impossible to get out.

That’s why scripture repeatedly reminds us to get away…to rest…to depend on God even in the midst of this thing known as life.

How about you?  Do you have a built in rest time?  Do you regularly Sabbath?  Or do you live life in the roundabout fast lane, able to see the side streets but unwilling – or unable – to get to the side streets?

That’s something to pray about, or as they say in Germany, prayfuhrgüglfurter.