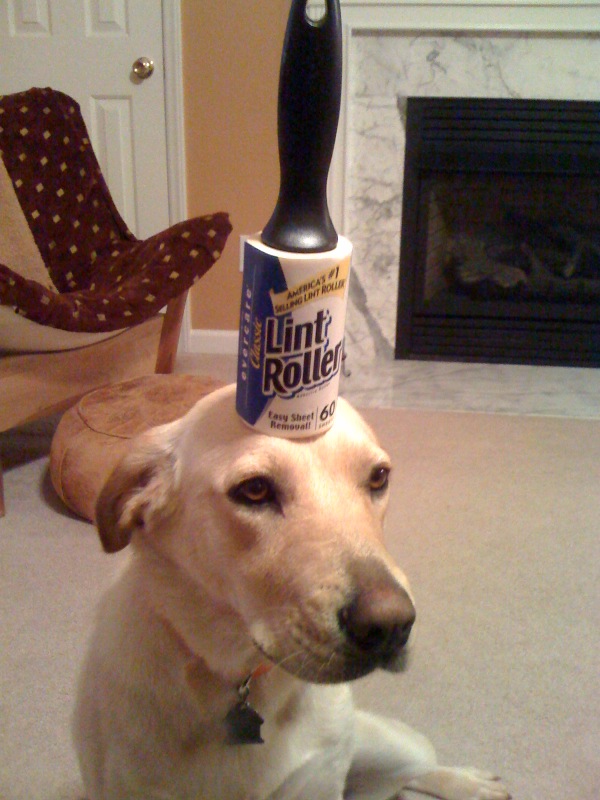 But back on Mother’s Day of this year, we became the proud owner of Sipsy the Wonder Idiot, a yellow lab that – dare I say it – has become part of the family.  The day we brought her home, I readied her space in the back yard, because she was not going to be an inside dog.

“This is an outside dog!” I would loudly proclaim to my neighbors, while my wife and kids were inside preparing her indoor doggy bed in the living room, her indoor doggy dishes in the kitchen, and her indoor doggy blender for whenever she got the notion to whip up a Milk Bone Frappucino in the middle of the night.

And sure enough, within three days the dog ventured inside.  “She just needs to know what goes on inside” my wife said.

A few days after that, she slept in a crate in the kitchen.  “Whenever there’s a storm she needs to sleep inside, so we need her to be used to being in the crate.”

And before I knew it, the dog was sacked out in the kids’ bedrooms, laying on her back with her feet in the air, laughing under her breath every time I walked by and saying a low, “Woof.”  Which is dog for “See there, sucker man?  The dog wins, every time.  Today it’s your kids’ bedroom, tomorrow I’ll be driving your car and listed as the primary beneficiary on your 401(k).  Now fire up the blender…puppy needs a fresh Frappucino.”

But I digress.  I’ve gotten used to the dog being an inside dog.  What I cannot get used to is the second round of shedding.

The first round of shedding came shortly after Sipsy came to live with us.  At that time, she was an outside dog, so no big deal.  But apparently, there’s a Labor Day shedding season, and she’s smack in the middle of it.  We vacuum up enough dog hair every day that we could create an entirely new dog. I’m convinced that all of this hair is not coming from her…there’s no way she could regenerate that much fur every day.  I’m pretty sure that she’s getting the hair from other sources…E-Bay, maybe?  Or perhaps she’s inviting other neighborhood dogs over while we’re asleep:

“Okay, Shadow, I’m going to need you to brush me right down the back, where I can’t reach.  There’s a good clump of hair there that’s waiting to fall.  Hooch, give ‘er a good shake right there on the carpet.  You’ve got a good shed thing going on there.  Thaaaat’s it.  Not so fast, Rocco, you silly black lab, keep your fur on…they’ll never fall for it.  Angel, baby!  Plug up that electric razor…”

However the fur gets here, it continues to fall.  And we continue to sweep, vacuum, take-her-outside-and-brush-like-crazy, and generally wonder if we’ll ever have a hair-free day again.  We’ve tried solution after solution, and I’ve only found one that works so far:

Make her an outside dog. It’s simple, it’s sure, it would settle everything once and for all. It seems so obvious to me, and you’d think it would be obvious to the rest of the family.

The trouble, it seems, is Sipsy.  Because they talked it over with her, and she told them that if they ever wanted to see any of that 401(k) money if God forbid something should ever happen to me…she stays inside.

Any other day I would probably take that as a direct threat.  But for now, pass the Purell.