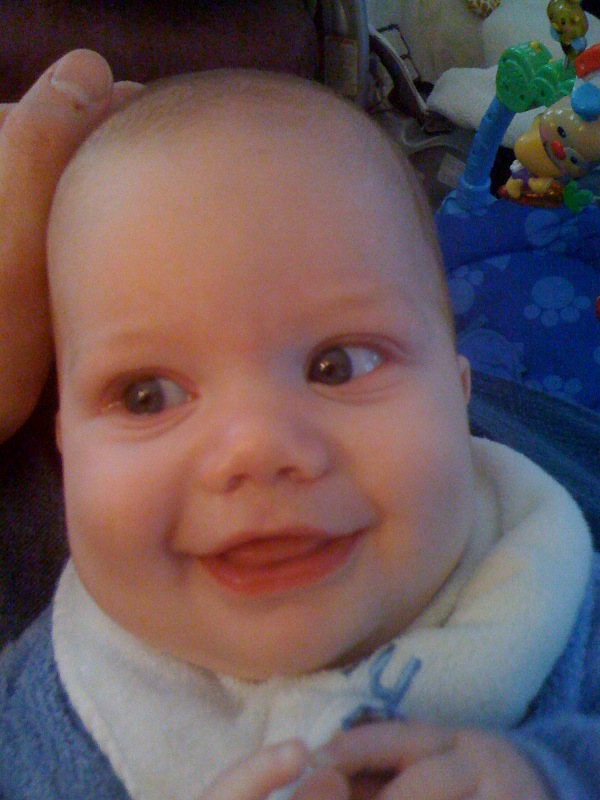 Most of you who stalk…um…follow Summit staff know that Small Groups Guy Spence Shelton is single-handedly sending the family doctor to Aruba in February.  So far this month, every family member but Spence has spent time in either the doctor’s office, ER, or a full-blown hospital visit.  This week, it was his oldest son’s turn.  And yesterday, the Babysitter Fairy wasn’t too kind to ’em when it came time for Kid #2 to be taken care of.

Which is why – for some reason that I still do not nor ever will know – Spence’s wife Courtney called me just before lunch and asked if I’d be available to hang out with Ben (not quite four months old) later that afternoon.

For some reason, I forgot that it’s been almost eight years since there’s been a baby in my presence.  I like babies, don’t get me wrong, I just don’t necessarily like spending time with them socially.  Neither would you if your dinner partner pooped themself.

But I digress.  Here’s the breakdown of the afternoon:

2:00 PM: Arrive at Chez Shelton, get the rundown from Babysitter #1, who is our staff counselor whose heart language is Spanish and I’m pretty sure that’s what she was speaking when she gave me the to do list.  She sounded like Ricky Ricardo when Lucy flooded the apartment with Cheez Whiz.

2:00:15 PM: Suddenly alone with the kid.  Begin to get suspicious that Cynthia left so fast.  What had he done wrong?

2:00:22 PM: Realize that Ben is sleeping pretty well.  Also realize that this could be an answered prayer and a time to get some work done.  But first: get the lay of the land.  Where are the diapers, the food, and what’s on TV?

2:29 PM: Ben stirs.  And by “stir” I mean, “Make that cute sound that babies make when they’re waking up, followed by high pitched wailing that caused the neighbors dogs to run just a few minutes later.”

2:30 PM: Realize I should have paid more attention to Cynthia’s feeding instructions.  And heated up the bottle instead of fiddling with the remote.

2:33 PM: Realize that I will never ever ever be able to hear out of my left ear again.

2:34 PM: Try the “test the milk on the wrist trick.”  Realize I have no idea what I’m doing and just stick the bottle in the wail trap.

2:35 PM: Bottle time.  Benny boy is finally happy.  I’m happy.  I figure out the remote and settle on A Baby Story on TLC.

2:38 PM: Realize that I have become a woman.  Switch to Fox Business Channel.

2:44 PM: Remember that babies should burp, just after Ben appears to have a blue tint.

2:45 PM: Think about how cool it would be if I could teach him to burp his ABC’s.

2:50 PM: Last of the bottle is finished.  Ben is embarrassed about something, because he’s red faced.

2:52 PM: Repeat to myself over and over: “You can do this.  You’ve had three kids.  This is not a big deal.  There’s a big bottle of hand sanitizer waiting on you.”

3:00 PM: Ben makes it to the bouncy seat.  I make it to the couch and proceed to rest my hands in a Clorox bath.

3:02 PM: Pull out the laptop because dang it, I’m going to get some work done now.  Attempt to hack into Spence’s wireless signal.

3:04 PM: Disappointed (but not surprised) that his password is MyConnectionsPastorSux.

3:21 PM: I contemplate how odd it is that I’m babysitting at 37 years old.  Consider calling up some friends and asking them to bring over their Chubby Checker records so we can push back the living room furniture and do the mashed potato.

3:30 PM: Ben decides that he despises the creator of the bouncy seat.  I realize the same.

3:31 PM: Begin the Put The Baby To Sleep Waltz, including swaying around the living room, making silly noises, and attempting to hum.  Pray like crazy that there is no Nanny Cam.

4:10 PM: My wife calls.  I whisper so as not to wake up the man child.  I wonder if I’ll get in trouble with the Shelton’s for being on the phone when I should be babysitting.  Also wonder if that will affect my pay.

4:15 PM: Raid the pantry.  Realize that everything is probably infected with whatever Zeke has.  Decide to take my chances with starvation.

5:05 PM: Help arrives in the form of Lori, my administrative assistant / frequent Shelton babysitter.  I channel the spirit of Cynthia channelling the spirit of Ricky Ricardo and by

8:22 PM: Review my Campus Pastor job description and realize I didn’t sign up for this.

Proof that the kid likes me.