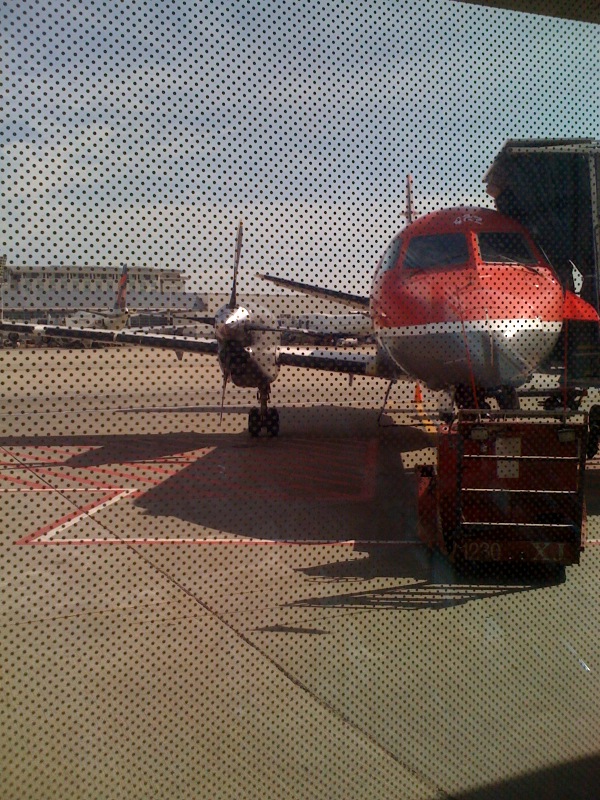 Compared to some of you who read this blog, I don’t fly much.  The pinnacle of my globe-hopping career was the time that I scored enough frequent flyer miles to get a subscription to Fast Company AND Conde Nast Traveller, which I read to think about all the places I’ll never fly to.

Editor’s Note: I think you mean, “to which I’ll never fly.”

Shutup.  But yesterday, I traveled to a conference up north, and part of my itinerary included the death-trap puddle-jumper you see below.  The first flight was relatively normal.  You could actually stand upright while walking down the aisle.  This connecting flight, however, was a different animal.

First, you’ll notice that it has a propeller.  A propeller. I didn’t even know those existed anymore.  I half expected to see Indiana Jones crawl out of the cockpit and back a large muscular man to his imminent death.  And let’s face it: “imminent death” was a great theme for the whole flight.  When the pilot turned the crank to start the engine, I briefly thought they had a fancy shiatsu massage.  But no, it was just the bolts flying out of the fuselage and wedging into my lumbar area, wherever that is.

When we took off, I could swear I saw a tow truck barreling us down the runway so we could get up enough speed.  We never got more than about 17 feet off the ground, which was fine because I was convinced that any moment we would plunge out of the sky.  Bird strike?  Nope, butterfly strike.  One moth would have taken us down.

And small…this plane redefined small.  The overhead bins were large enough for the single deck of cards that I forgot to bring along.  The pilot doubled as the flight attendant, baggage handler, and mechanic.  Beverage service was a Sam’s Choice brand two liter that we all passed around and took a swig out of.  And the snack was peanut.  Not a bag of peanuts.  A peanut.

The good news is that I couldn’t focus on any of those things, because I was too busy obsessing over the fact that the plane hadn’t been cleaned since the Wright brothers first flew it.  The seat belt had chunks of the last passenger who was decapitated while wearing it.  There were bacteria large enough that they had to purchase their own seats.

So yeah, you might say that it was an eventful flight.  I for one hope that this nets me enough frequent flyer miles that I can subscribe to another magazine.  Any of ’em will do, but I’m especially fond of Funeral Planning Monthly.