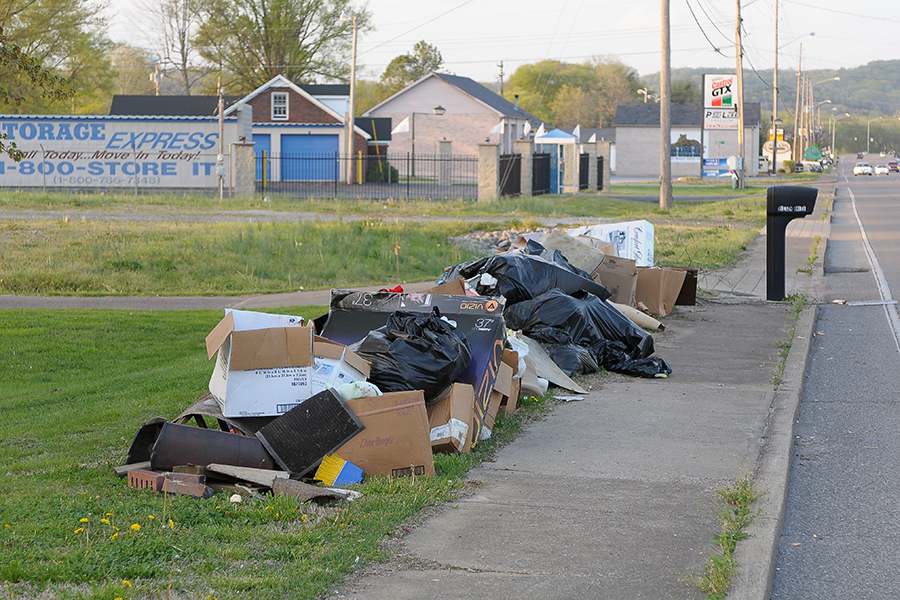 Last week the Franks crew got the heck out of Dodge for a little post-Easter relaxation.  Our journey took us back to our hometowns in Tennessee and Alabama just to hang out with the grandparents and eat our weight in real barbecue.

It was when I drove into my hometown that I remembered the twice a year trash amnesty week.  For seven days in the spring and a matching seven in the fall, you can put anything – anything at all! – out on the sidewalk and the city will pick it up.  Reader’s Digest magazines from 1952?  They’ll get ’em.  Broken dining room chair?  Not a problem.  Rat-infested mattress that looks like several people may or may not have died on it not that we’re asking any questions if we know what’s good for us?  You betcha.

What amazes me most about amnesty week is the number of people that descend on the piles of trash before the city workers can get there.  For example, I helped my dad take an old patio table to the curb.  Within 15 minutes, that sucker was gone.  All over town, you can see people driving around in their Beverly Hillbillies-style pickup trucks, gathering up piles of junk trash crap treasure.  There was an old sofa in the back, a TV strapped to the hood, and what appeared to be a very elderly man pulled along in a trailer yelling “I’m not dead!” (his wife preferred the dump over divorce).  The entire week was a fun lesson in what people will pick up.

That’s fun when it comes to stuff in your garage, but not so much fun when it comes to stuff in your heart.  Think about it: how much of other people’s junk do we love to pick up?  That co-worker’s bitter attitude looks like a good addition, so we throw it in the trunk.  A parent’s addiction that we once hated is now too much to resist, so we toss it in the back seat.  A friend’s negative outlook on life begins to make sense, so we commiserate in their misery.

The Christ-follower’s call is to take out the trash, but “put on the Lord Jesus Christ, and make no provision for the flesh, to gratify its desires.” (Romans 13:14)  What trash do you need to kick back to the curb today?  Amnesty week begins.