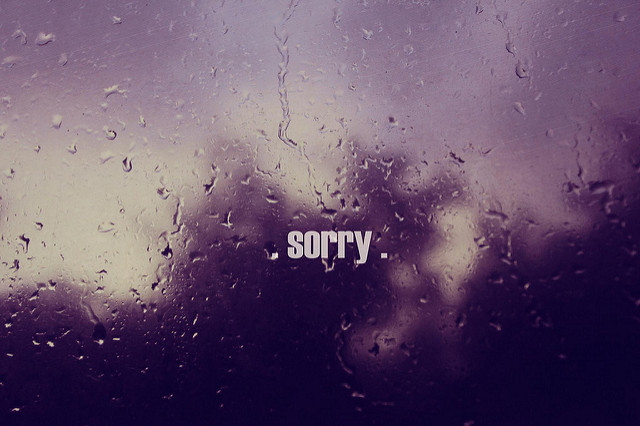 Psst: Hey you.  This is the 2nd part of a five part series.  Start here.

My Grandaddy Franks was the King of Snark before snark was cool.  He’d tell his employees, “You can show up without your pants, but don’t show up without your keys.”  He’d tell my sister, “You’re pretty two ways: pretty ugly and pretty likely to stay that way.” (for the record, we all knew my sister was and is a beauty, but as her little brother I was always particularly fond of that one.)  And whenever a grandchild would get within ten feet of him, he’d say, “Glad to see you back!” and slap you on the back as hard as he could.  Usually on a sunburned shoulder.

One saying I can’t attribute to Grandaddy – but know he would have loved – is this: “I know you’re sorry, now apologize.”

In other words, “I think you’re a pretty big waste of skin.  Stop breathing my air.  You screwed up, and I’m not just mad at your mistake, I’m mad at you.”

One of the biggest mistakes we make is not the mistake itself, but the mistake of not taking it personally.  Instead of recognizing that we blew it, we usually blow it off.  “It’s not a big deal,” we say. “That stuff just happens.”  People forget.  Balls get dropped.  Systems don’t always work.

Being a professional mistake-maker, I’ve learned that if I can place myself in the other person’s shoes I’m 87% closer to making things better.  I’m not advocating that we pander to people or fake sorrow so we get out of hot water.  I’m saying that we sincerely make an attempt to see the inconvenience from the other side of the fence.  How did that make them feel?  What did we inadvertently communicate?  Why was this such a disappointment to them?

I mediated a conversation not long ago where someone felt like they hadn’t been “heard.”  The offending party couldn’t understand what he’d done to contribute to that feeling.  He had perceived his response as efficient, but they heard it as brusque and rude.  Once both parties viewed the situation from the opposite set of shoes, it changed everything.

In our get-it-done world, it’s easy to mumble an “I’m sorry” just to get the situation over with and get on with the task at hand.  But if we’re truly committed to serving people, we won’t settle for that.  We’ll look at things from their side of the fence.  We’ll put ourselves in their shoes.  We’ll take it personally.  And when we truly see the grievance through their eyes, the apology will not simply calm them…it will change us.