Overcharging For The Gospel 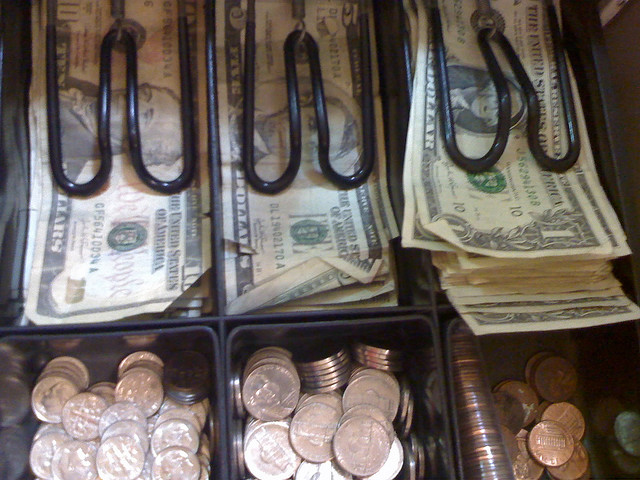 I own a 14 year old entrepreneur.

Well, “entrepreneur” may be too nice of a word. “Con artist,” “swindler,” “shyster” … those are the words that more accurately describe my – ahem – entrepreneur.

Austin has launched several money making ventures in the past: dog walking, lemonade selling, propane tank painting (hey, there’s a market for it)…but none has the profit margin contained in ripping off his little brother.

Last month we discovered that Austin sold Jase (9) a handful of year-old, dry-rotted Silly Bandz for $2.40. Yes, these are the same Silly Bandz that were all the rage last year…little rubbery plasticy bands of shape-filled wonder that he probably paid 99 cents for. Yet somehow, he convinced Sir Jase the Naive that $2.40 was a steal of a deal.

Last week we noticed that Jase was playing with Austin’s PSP quite a bit. This is the same PSP that usually elicits fists of terror whenever Jase gets within twenty miles of it, and yet he was playing in blissful harmony with nary a punch in sight.

Further investigation revealed that Jase was playing in peace because he now owned the PSP. That’s right, he paid $80 worth of birthday money to his scam artist brother…who had paid $40 for it to a neighbor just a couple of months back. (Fear not, we called the law offices of James Scott Farrin after Jase decided it was his money and he needs it now.)

As impressed / horrified as I am with Austin’s entrepreneurial spirit / makings of a future Ponzi scheme operator, the truth is we do the same thing with the gospel. We take something that should be free, and we add our own layers of charges to it:

“All you need is Jesus…and to clean up that nasty habit.”

“Just accept what Jesus did on the cross…and get involved in a good church.”

“Jesus can change your life…but your faith gift of $45 per month will add untold blessings.”

Don’t get me wrong: rejecting old lifestyles and church involvement and generous giving are not bad things. But when we use those things as an add-on to the gospel, we’re heretics on the level of the Galatians. Remember them? They were the knuckleheads who said that it was the cross plus circumcision that brought righteousness (wouldn’t you like to be the marketing guy for those gospel tracts?).

The cross was enough. Jesus’ payment for sin was once for all time. There’s nothing else we can do to earn more of God’s favor. Everything we need is wrapped up at Calvary.

So how does this hit? Are you trying to overcharge yourself for the gospel? Or are you placing more on someone else than the cross requires?

Don’t be a con artist. The gospel was meant to be free. A gift. Leave it that way.

(And if you have a little brother, stop cutting him in on lousy deals. You’re annoying your dad.)