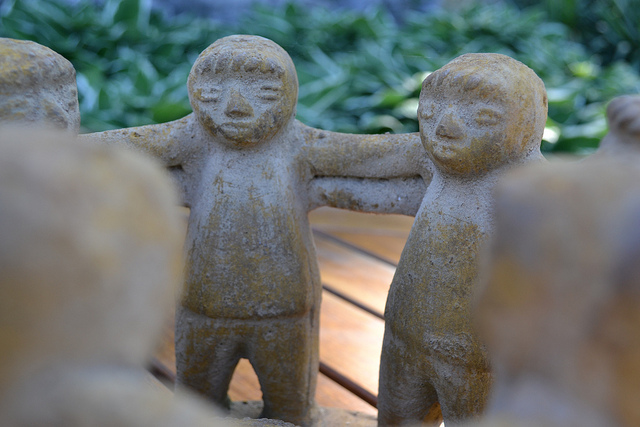 Alright, blogosphere, we have a serious matter to discuss. Grab some coffee. Clear your minds. Focus on the topic at hand:

A bit of background: Merriem and I are new to suburban life. For the last eight years we lived in the country, where sunlight was piped in and neighbors only came calling if our dog ate their chickens (true story). We each grew up in tiny towns where everybody knew everybody, or at least knew who you belonged to.

But since June, we’ve been living la vida suburbia, in a neighborhood complete with sidewalks, storm drains, and a homeowner’s association. It’s like The Truman Show meets Leave It To Beaver meets The Neighbors, a new show so incredibly awful I can’t believe it wasn’t cancelled by the first commercial break.

We’ve been trying to meet as many neighbors as possible, a difficult feat when the average temperature this summer was Surface Of The Sun. But one neighbor I met fairly early on was a delightful lady in her 70’s whom I’ll call Louanne, because that is her name and I’m fairly certain that reading this blog is not on her list of 1,001 things to do before she dies.

In the first meeting with Louanne, I was out for a walk with Haven and she was walking her dog, whom I’ll call Toby even though that’s not his real name, but really: why should I remember a dog’s name? It’s a dog. We exchanged names and pleasantries and went on our way.

Meeting number two: I was working in the yard when Louanne stopped on the sidewalk while she was walking Toby. Picture it: I was standing about three feet away from her, and she said, “Welcome to the neighborhood!” and spread out her arms. My friends, she spread out her arms.

Where I come from, spread out her arms is code for “move in for a hug.” So I did. Quite slowly and awkwardly. And my hunch was right, because my sweet little 70ish neighbor embraced me.

And then kissed me on the cheek.

(Let me interrupt my own story: I come from a section of the country where you do not casually kiss other people. You say things like “Bless your heart” and “Hot enough for ya?” but you do not kiss someone that you didn’t buy a sizable piece of jewelry for or share the same last name with. So the concept of a casual kiss – even just on the cheek – is still very strange to me, and I considered putting a For Sale sign up in our yard that very day so as not to ever have to go through that again.)

Meeting number three happened on Saturday night. We had a neighborhood picnic, and I was fully prepared to throw Merriem in the path of Louanne’s lips, because that’s what husbands do.

Meeting number four happened last night. Again, I was walking, and again, she had Toby on the leash (apparently he has bladder issues). As I approached, I was racing through my options: pretend I’m looking at my phone? Fake a sneezing fit? Tell her that I have a rash that’s exacerbated by close contact with hugging strangers?

As I got within two feet of her, she threw out her right arm. Not both, just one.

So, reluctantly, cautiously, I moved in for a hug. To my 70ish sweet little neighbor. Who is at least 18 inches shorter than me. And her nose was in my chest.

And at that precise moment it was 100% apparent that the thrown out right arm was, in fact, just a thrown out right arm. Perhaps a muscle spasm, but not a posture of hugging. And Louanne and I proceeded to have what was the most awkward 1.4 seconds of both of our lives. Even Toby was embarrassed.

So I ask you, readers: what is the code? To hug or not to hug? Can I leave my house again? Will Toby ever learn to use the toilet?

When is it okay to hug a stranger? Comment below.