Through a Glass Darkly 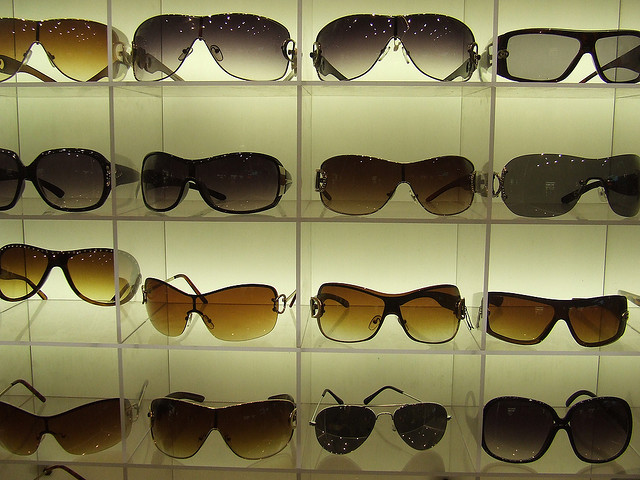 If you don’t live in the Triangle region of North Carolina, you may not know that this weekend we had unseasonably warm temperatures. And by “unseasonably warm” I mean that it really wasn’t all that warm but the sun did shine so that means the pasty thighs were out in force at city parks and backyards everywhere, because doggone it we could be.

Which was great, until I pulled into the garage and went to swap my sunglasses for my regular peeps.

And they weren’t there.

Because Merriem had them in my car.

The next hour was a comedy of errors. I tried to put Haven’s diaper on for her nap…with sunglasses. I attempted to find some shorts to throw on in our 60-watt bulb closet…with sunglasses. I tried to do some reading for a meeting later on this week…with sunglasses. And don’t even think about asking why I didn’t take off the shades to do those things. If that had happened you would have read a headline this morning that says LOCAL MAN FOUND DEAD AT THE BOTTOM OF STAIRS; CORONER RULES DEATH BY SQUINTING.

So I retreated to the front porch, determined to sit in the sun and actually get some use out of my glasses until Merriem returned home; which she mercifully did just moments later.

Paul would have appreciated that scenario. In 1 Corinthians 13 he said “now we see through a glass, darkly, but then face to face. Now I know in part; but then shall I know, even as also I am known.” (KJ21)

We tend to stumble through life with partial knowledge. We ask the “why?” questions a lot. We face things like sin and sickness and suffering and pain and premature death, and none of it makes sense. There are days when our spiritual sight is simply dim, because we have a hard time reconciling temporary stuff in the light of eternity.

But God promises that one day, we get to trade in the shades for clear lenses. One day, what was blurred in the shadows will become crystal clear in the light of his presence. One day, we’ll have an “aha” for the ages and understand how God was working all things for our good.

But until that day, that doesn’t mean we get to check out and chalk up the “why” to an unknown God. Because God is still God, and he is still good. While we may not know how he is working, we can know that he is working.

And that can make all the difference.