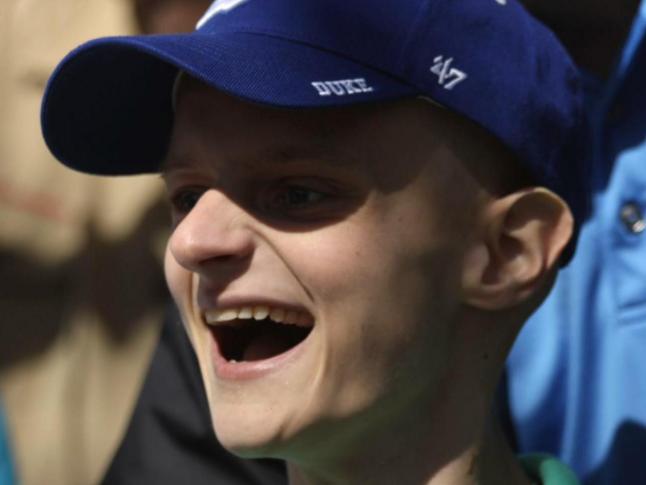 Our Summit family lost a warrior this weekend.

Noah Spivey was a seventeen year old who had seen more than his fair share of suffering. For the last four years he’s battled Ewing’s sarcoma, a rare bone cancer that took him in and out of hospitals and clinics around the country as doctors struggled to find a cure, a treatment, anything that would bring healing or at least minimize his symptoms.

I met Noah for the first time a few days after his initial diagnosis four years ago. Yesterday, I told his mom Christine that I remember walking into Duke Hospital, trying to come up with something to say that would encourage him. One chat with Noah assured me that I never needed to worry about that again. That’s because whenever you talked to Noah, you were rarely the one doing the encouraging. You walked away challenged, you walked away humbled, you walked away grateful for how God was working in a young man’s life, even as his life was slipping away.

Noah wore his cancer as a badge. It wasn’t a badge of pity, but rather one of opportunity: he realized that with the cancer came the chance to put his faith on display.

And display it he did.

Noah never lost his love for Jesus. I never heard him question God’s faithfulness even in the midst of excruciating suffering. On the contrary: he said over and over that “What Satan meant to kill me, God is using to give me life.” Those weren’t just clever soundbites for a video, it’s what we all saw Noah live every day.

Even as cancer ravaged him, Jesus was restoring him.

We don’t know why Noah’s story turned out as it did. Our pastor reminded us this weekend that we may never find the silver lining in our suffering. And yes, as a church we prayed for an outcome that would be much, much different.

But the truth is, Noah was healed. Because as we worshipped through tears this weekend, Noah’s faith became sight. His journey with pain was over, but what he believed in his heart is now being seen with his eyes.

As you pray this week, would you pray for Noah’s family? John, Christine, Lisa, Brooke, and Timmy are just beginning life without Noah. Pray that they would live with the same gospel-driven strength they’ve shown throughout Noah’s illness. Pray also for Jason Gaston, our Family Ministries Pastor. I’ve watched my friend Gaston walk faithfully with the Spivey family, and was humbled to see him lead our church so well through a time of grieving reflection this weekend. No student pastor should ever have to bury a student, but he has shown us what it means to trust in Jesus even while dealing with his own pain.

Noah Spivey wasn’t just a special kid. He was a young man who led our church on a journey of faith. He preached the gospel to us constantly for the last four years. He reminded us that joy is not found in perfect health, but in Jesus. His faith led us to greater faith, and our church family is stronger because of what God did through him.

May we all live lives marked with such courage and faithfulness.