The Problem With Outside The Lines 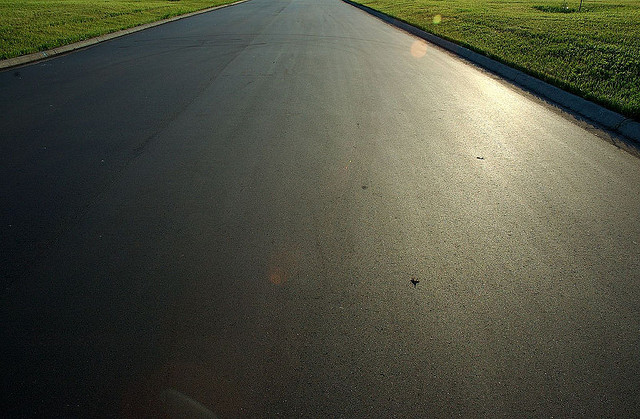 It’s been a most-of-the-summer project that seems like it ought to be wrapping up. Oddly enough, for the better part of the last ten days, there’s been no activity.

But there’s also been no lines.

Nothing. No dotted yellows in the middle. No solid whites on the shoulder. No turn lanes, no do-not-cross, not one single drop of paint.

And you’d think driving outside the lines would’ve brought at least a little bit of chaos. Weaving…dodging…confusion. But nope. Life has gone on as normal outside our neighborhood. Though the surface is different and the markings are absent, the road is much the same. And so weeks and months and years of habit continue on, unabated. People are getting to point A to point B out of pure habit.

Compare that to a couple of years back when I revisited a town we lived in over a decade ago. They’d undergone a road upgrade as well. But instead of resurfacing, they took it an entirely different direction. They added a bypass, new onramps and exits, new signage…the whole shebang. And as I drove down the highway I’d traveled thousands of times, I was completely lost. It took me over a mile to figure out I wasn’t anywhere close to where I thought I was. It’s not that the familiar landmarks were gone, it’s just that the road didn’t take me anywhere close to them.

On our teams and in our organizations, there are times that we just need to resurface the foundation in order to “get outside the lines:” tweak here, adjust there, modify over there. But if we’re not careful, we will resort back to the old methods. We’ll be too familiar with the old ways and our familiar habits that we’ll too easily return to them.

One author calls that the deadly effect of incrementalism. I’ll admit it: I’m a serial tweaker. I can adjust a process by one single degree a million different times. But this author says that sometimes, true change it can’t be incremental. You have to dig up the road and pour new asphalt somewhere else.

Don’t shun the resurface jobs, don’t vilify coloring outside the lines, but be honest enough to admit when it’s time to take things in a completely new direction.