The Upside of Tradition 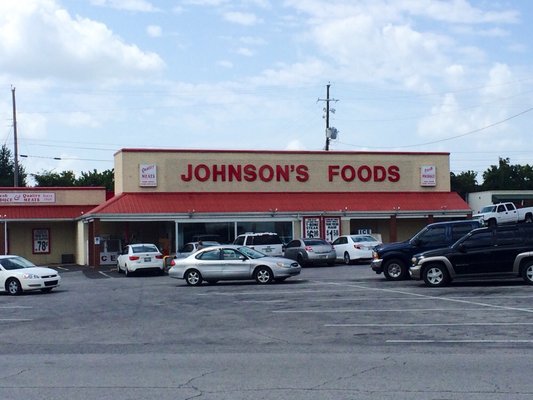 Last week we made the annual Christmas pilgrimage to the homeland. Nothing roots you quite like heading back to your hometown for a week. Every time I land in southern middle Tennessee, I’m reminded of the things that were quite normal for us that are increasingly abnormal anywhere else.

Exhibit A: Johnson’s Foodtown. It’s the local grocery store that’s just five minutes from the house where I grew up (confession: everything is five minutes from the house where I grew up, because again, small town.). It has outlived Bi-Lo, Joy, and another regional supermarket or two that you’ve probably never heard of. It has endured the Wal-Mart (yes, we say “the” Wal-Mart). It’s the kind of place where you’re stared at when you walk in, because they know they should know you or at least your people. And it’s a place where you’re still going to get help getting your groceries to the car, whether you really need the help or not. Buy a few 2-liters? That’s okay, we’ll carry them for you. It’s a surprise and delight moment that I forget about from year to year, but immediately embrace it when it happens.

Exhibit B: Gravesides. While we thankfully didn’t hit a funeral last week, I was reminded of another hometown tradition. The year was 1992, and Merriem was attending her very first funeral in my town. We were finishing up the graveside service, and she glanced at me as if to say, “We should go now, right?”

Wrong. You see, in my hometown, the graveside isn’t over until the cemetery attendant fires up the Bobcat three graves over and fills in the hole. That’s right: with everyone watching, we see the casket lowered and watch the dirt poured on.

Merriem was horrified. I was confused. That’s the way we’d always done it. I knew no different. And though she had grown up just 30 minutes down the road, she couldn’t believe what she was experiencing. In her hometown, you left the cemetery with the casket above ground, and returned later in the day to see the completed work. Weird, huh?

I give you those two examples to illustrate that traditions aren’t always bad. It’s the feelings that the traditions evoke that can become the villains.

If you’re a newcomer to Johnson’s Foodtown, you might be surprised to have someone offer to carry your groceries to the car. But it’s a welcomed surprise. You flash back to a slower time when that was the rule rather than the exception.

But at a gravesite, what is is a jarring contrast to what you think should be. Instead of a familiar throwback, that experience just didn’t mesh with Merriem’s norm, and 23 years later she still remembers how atrocious the whole experience made her feel.

As you’re starting a new year and looking at new norms for your church, don’t be so quick to chunk tradition. Some of the things that make your church unique are the things that – for you – are traditional. But that doesn’t mean they’re bad. Here are a few quick questions to help you measure the impact of your traditions:

1. Does this activity include or exclude? Does a guest feel like an outsider when everyone else knows the drill, or is this making them a part of the family?

2. Does it require explanation? If the answer is “yes,” then give one. There’s nothing wrong with some “insider” activity or language, as long as you give the rationale.

3. Does is provide an “I’ve been here before” moment? Waltz’s reasoning behind coffee bars in churches is that it instantly gives guests a feeling of familiarity.

4. Does it help people take a next step? If your tradition is all about making comfortable people more comfortable, it may mean that it’s not helping anyone grow.

5. Does it cause unreasonable discomfort? Discomfort isn’t a bad thing. Just about any gospel-centered sermon is going to produce some soul-squirming. But if the discomfort arises because it’s sloppily executed / unnecessary / has no forward momentum, it may be time to chunk it.

What are some traditions your church needs to rethink in 2015?