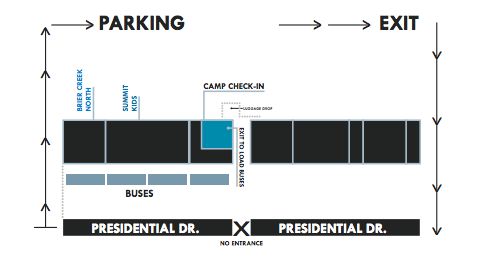 Over the last few weeks our church has sent off a few hundred kids to summer camp. With a separate high school, middle school, and elementary school camp, and separate designated departure days for each, our student team decided to add a little flair by providing a small army of volunteers to help with parking, registration, luggage transport, you name it. I jumped on the chance to park cars, because truth be told that’s a job I love to do. If this Connections Pastor thing doesn’t work out, I’m going to be a professional car parker. You get a dorky neon vest, a partially-working radio, and a power trip that goes straight to your head when you can order a two ton hunk of fiberglass and metal to go wherever you say.

I love parking cars, and I loved parking cars even more because of Jillian, our Student & Kids Admin who worked all of the aforementioned systems down to a fine science. Folks, if America ever comes under attack, I’m gathering my family and heading over to Jillian’s place, because she will have already assembled her own militia, developed a plan for food rations, and drafted the first round of the constitution for her own country.

Jillian developed a well-oiled plan for parents to arrive, drop off luggage, drop off kids, finalize paperwork, say goodbye, and be on their way. The document went out a couple of weeks in advance, complete with a map of where to go once you arrive on campus. There were directional arrows, people. Directional arrows. It couldn’t have been any more simple if she had provided at-home curbside pickup.

Except it wasn’t so simple. At least to this particular guy in a dorky neon vest. Because as I stood on the road watching parents arrive, I could sense their desperation to pull in whatever entrance they were accustomed to using on the weekend. Never mind that they had to practically run over signage in the middle of the road with 450 point font that said CAMP and a big honkin’ arrow that directed them forward. Never mind that there was a belligerent guy in a dorky neon vest waving his arms furiously and beckoning them to proceed to the right entry. Never mind that if they bypassed the signs they would end up in a barricaded area of the parking lot that would force them to unload luggage and heft it all the way around the building. Never mind all of that, because apparently it was just easier to do their own thing.

The crazy part is that there was a plan. A well-defined, incredibly-detailed plan that was designed to make life easier on the parents. There was a plan creator named Jillian and a bunch of plan executors in the parking lot who knew the plan and were trying to work the plan. And if people would have just trusted the process, it would have gone so much smoother.

Maybe you see where I’m going with this.

The irony of it all hit me as I stood under the blazing sun in my dorky neon vest: what a picture of my relationship with God.

When I stop to think about it, I know that he has created a plan. I know that he sees the big picture. Where I see a shortcut, he knows there is a dead end. Where I see a better way, he sees a more painful way. Where I see my preferences, he sees my heartbreak. And all the while he stands ahead of me, beckoning me forward, urging me to keep moving and to trust that he knows what he is doing. And yet I run over signs and find myself lost because I simply don’t believe that he knows what is best for me.