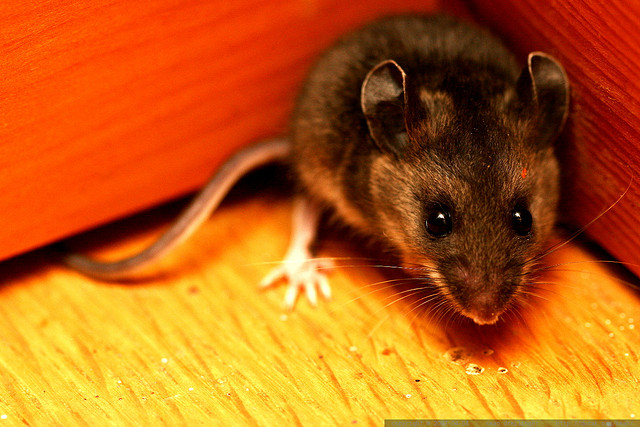 It was a day to remember, but for all the wrong reasons.

Merriem and I had heard great things about a particular restaurant in Durham (no, I won’t tell you the name of the place). It had come with high praise from a trusted friend: good food, cheap prices, hopping ambience. Since we have the spiritual gift of eating, we didn’t give it a second thought and decided to give it a try.

Our friend was right: the place was packed out. So we stood at the counter, placed our order, and I excused myself to go wash my hands (because you know: germaphobe). While I was in the restroom, a guy sitting in the next space over asked my wife, “Want to see something disgusting?” Now I’ve talked to her about talking to strangers, but my wife – having the morbid fascination with disgusting things that she does – looked over to where he was pointing. There, by the entrance to the restaurant, was the biggest, juiciest, angriest old mouse she’d ever seen. His hind legs were stuck to a glue trap. He was alive. He was ticked. And her appetite was gone.

Now you think that would be the worst part of this blog post. I’d give you some guest service-related advice like “Don’t have mice,” and we’d call it a day. But nope. Because the reality is, I’m sure that lots of restaurants have vermin. I’m positive that if we knew what went on in most restaurant kitchens, we’d never eat out in a billion jillion years. No, the bad part of the story is what happened next: the man who tipped us off walked up to the counter and very politely informed a restaurant employee of the problem. She loudly said, “Eww!  That’s gross. We’ll take care of it.”

Then it was a good five minutes before an employee walked out of the back, and instead of inconspicuously just bagging Mickey up and taking him out back, he glanced around, picked up the nearest trash can, and set it on top of the mouse. Mind you, he didn’t flip the can upside down so that that open part of the can formed a nice little mouse house. No, he put the flat bottom on the round rat and now the angry rodent was downright incensed. You could actually see the can wiggle around as our little bucktoothed antagonist tried to plan his escape and plot the restaurant worker’s death.

Oh, wow. So many issues arise here, but the biggest is that the employee didn’t fix the problem. He covered up the problem. Rather than making the experience right, he exacerbated the wrong. Rather than restore our confidence in their commitment to cleanliness, they reinforced our concern that they didn’t care. Rather than acknowledging and correcting the obvious problem, they took the easy way out and made a bad problem worse.

I’ve eaten in enough third-world countries that I can pretty easily forgive the presence of a mouse in a restaurant. What I can’t overlook is the fact that they overlooked an easy fix.

In your campus guest services experience, are you covering the mouse? What are the blatantly obvious issues that you’re trying to sweep under the rug? A bad parking plan? An unfriendly, poorly-placed greeter? A confusing childcare check in system?

Don’t cover the mouse. Get that sucker outta there for good. Your guests deserve better. And like me and my wife, they probably won’t be back.