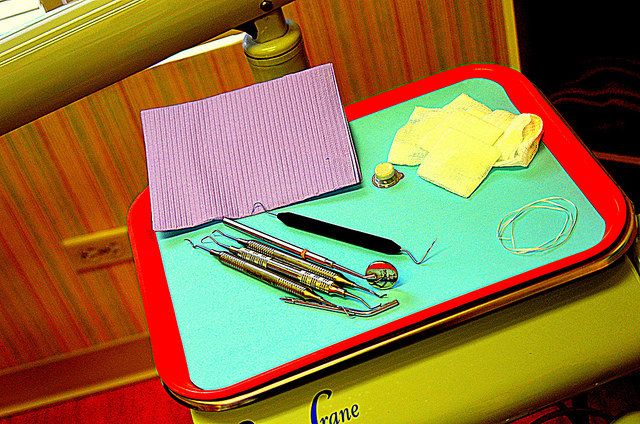 I’m enjoying some long-awaited downtime with my family this week. The following post originally appeared on February 19, 2009.

Yesterday I had to make a return trip to the dentist’s office to replace a filling that decided to make a run for it.  When I was first laying in the dental chair and formulating this post in my head, I thought for sure the topic at hand would be the anesthetic, the puffy tongue and jaw, and the fact that I said a very bad word in my heart when they jabbed that needle into my gums.

I also could have written about the fact that Dr. Turner seemed to be having entirely too much fun in the process:

Dr. Turner: “Okay Danny, I’m going to need you to open just a little wider.  I need to put some more gauze in there.”

Dr. Turner: “Just a little more…I need to insert this clamp on your back tooth.”

Dr. Turner: “And if you can shift your tongue, I’m going to put this Scotch tape dispenser and my collection of Beatles albums in there, just to see if they will fit.”

However, from the time the procedure was over until the time I sat down to write about it, something transpired that trumped any other idea.  Here’s the way it went down:

I’m a fainter.  I’m not proud of that fact, but it’s true.  I faint when pain hits me, when pain hits other people, when I think about pain hitting other people or maybe me, and occasionally during particularly gruesome episodes of ER.  But there’s no time where I’m more likely to faint than when someone comes at me with a needle.  Sure enough, on Wednesday – had I been sitting up during the shot – I would have hit the floor.  But I was already flat on the dental chair, and even though I broke out in a cold sweat and thought I was going to see Jesus any moment, I remained concious.

Fast forward to the end of the visit, when I’m getting up to leave.  The dental assistant comes back in the room and says, “Mr. Franks, do you need to stay with us for a while?”

“Excuthe me?”  (Remember I still had a numb mouth and tongue.)

“Do you need to stay with us for a while?  I mean, do you feel alright?  Would you like to just sit here?”

“Oh, no sir, you look fine.  It’s just that your wife called the front desk during the procedure and asked that we keep an eye on you…you know, because of the fainting issue.”

“Your wife called…it was sweet, really…she just wanted to make sure you were…”

So I walked out to the parking lot, pulled out the celly, and dialed the house.  She answered.

“Why in the world did you call the dentitht?”

(Peals of laughter erupt from the other end of the phone.)

“Baby, I’m sorry.  They weren’t supposed to TELL you that I called…”