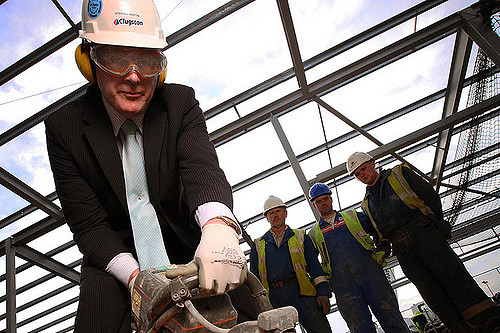 I’m a sometimes fan of the CBS reality show Undercover Boss. While I recognize that it is highly-staged and engineered for emotion, the principle behind the process is important: good leaders are good followers. Each week, CEOs don lousy disguises and join their employees on the front lines. Along the way, they’re exposed to the flaws in the system, the rigors of the job, and the frustration of their team.

If you’re “in charge” of anything – ministry or otherwise – taking off the boss hat and joining your team members is a great discipline. That one act can immerse you in figuring out what works and what doesn’t in your culture. But to make your time the most effective, it will help to follow these five tips:

1. Follow. Period. Don’t embed yourself for the purpose of on-the-job coaching. Nope, take the humble position of a servant. Do what you’re told. Refuse to critique. This is hard for leaders (ask me how I know), but insist that those you lead lead you for a change.

2. Ask good questions. Seek to understand the process. Seek to know the people executing the process. And before you’re tempted to ask and then fix, refer to tip #1.

4. Say thank you. This is the one area where you can reassume the leadership hat. Use the face time to show gratitude to those who are running the plays every single week.

5. Make it a habit. Don’t be a one-and-done leader. Schedule regular time to stop leading and be led. Some companies require their executive teams to spend a week each year doing front-line tasks. There’s no right schedule here, but I’d guess quarterly is four times better than annually. (#MathSkills)

Have you found success in taking off the boss hat? Comment below.