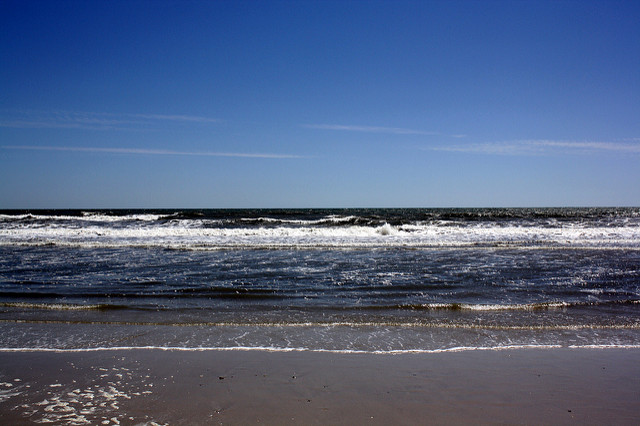 I’m not ashamed to say it: I’m not the biggest fan of the beach.

Yes, yes, I know we’re entering vacation season and I live in a state that is attached to a beach and I’m married to a woman who is officially a Beach Person and many of you own beach houses that you’ll never invite me to and what do I care because you haven’t invited me so far and some of you including my Beach Person bride will take issue with my strong statement of beach hatred. But I maintain that if God had wanted me to like the beach, he would have made sand feel more like my recliner and the sun feel more like my air conditioning. Or at least put a few more mountain cabins on Ocracoke Island.

The beach has a weird factor that we should talk about, and that’s ocean drift. I first discovered ocean drift on my first trip to the ocean when I was a wee lad on a middle school retreat. I was out in the water, picking my way around Who Knows What (jellyfish? seaweed? dead bodies? generally slimy stuff?) and trying to catch a few waves and hang a few tens. And suddenly, I realized my entire gaggle of youth group friends (all two of ’em) had moved about 50 feet down the beach.

That’s right, they just picked up and moved. All their stuff, all of them, and I was in chest-deep water having self-esteem issues and wondering what went wrong. It was bad, I tell you.

But then I realized they hadn’t moved. I had moved.

Editor’s Note: that’s a delightful illustration…almost as good as the first 142 times I heard someone else use it. Move along.

Here’s the point: in church world, our mission is to reach people. And the people we are trying to reach have needs that are relatively static. I don’t mean that everyone in our community has the same needs, but they all carry variations on similar themes: people are lonely and want to connect. People are hurting and want to be healed. People are guilty and want to find peace.

If we as leaders are not careful, we can find ourselves drifting into new and different territory that – while novel – may not be helpful.

That happens when we get comfortable in our own surroundings, when we focus on what’s immediately in front of us, when we are having fun just having fun.

That happens when we try to offer people some variation of the gospel instead of the gospel itself. It may look and sound similar, but rather than pointing people to the life-changing power of Jesus, it subtly inserts an air of self-help that is all about self and not at all helpful.

And before we know it, we’re a few hundred yards away from where we started and the people we’re trying to reach.

So how do we prevent the drift? We stop making assumptions. Rather than thinking we know what’s best for our community, we get to know our community. We ask. We talk to people about their hopes and fears. We do what’s best for others rather than doing what’s comfortable for ourselves. And above all, we remember that if we fail to give them the gospel, we have failed.

Be careful of the drift.