How To Run A Lost And Found 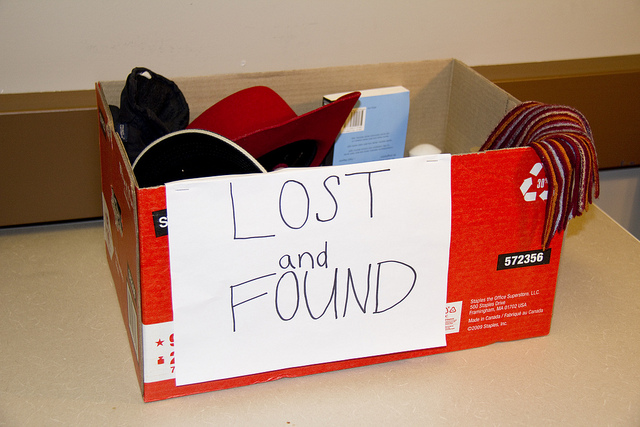 Welcome to the How To series here on the blog, where I occasionally tackle mind-numbingly boring topics that make the hidden nerds among us geek out. The rest of you that don’t care about these things, well…you need to learn to live a little. Read on.

Every church or organization has a lost and found. Namely: people lose stuff and other people find stuff. But there’s an art to making sure that the two sides coordinate. Here’s how to make that happen:

1. Have ONE spot for your stuff.

I recognize that stuff gets misplaced in the auditorium, in the kids’ space, in the restrooms, and in the choir loft. But you multiply complexity by having multiple lost and found repositories. Cut it to one: preferably at a central location like your information table.

People can last a week without a misplaced toddler sock or favorite travel mug. But woe be unto the person who loses a phone, purse, or a set of keys. If those items get turned in, do your due diligence to reunite them with their owner on the same day. And if you’re mobile…

If your office is located in a different spot than your meeting venue…and especially if your supplies get locked up in a storage trailer for the week…serve your searchers by taking their phones and purses and keys with you. That’ll save everyone a ton of heartache when the calls start coming in on Monday morning.

Use simple paper tags to identify the date the item was turned in and where it was found. This gives you an easy way to keep up with how long you’ve had it (more on this in #6).

5. Attempt to reunite people with their stuff.

If a Bible has a name written in it or a kid’s diaper bag has an ID on it, use your network of relationships (or your church’s database) to get it back to where it goes.

(BONUS) Let people know you have their stuff.

After an all-church event a few years ago, we discovered that 12,000 people can leave behind a lot of stuff. I loaded my back seat and trunk with everything we gathered, and we set up an online form where people could tell us what they were looking for. We pushed it via social media and within a couple of weeks had reunited roughly half the items with their owners…not too shabby.

What are your best practices for running your lost and found?