Confessions of a Control Freak 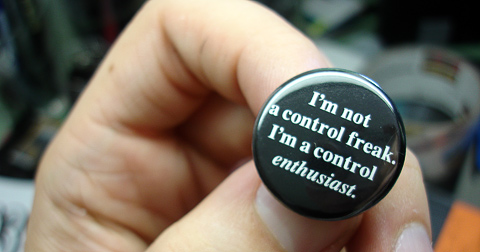 “My name is Danny, and I like things to be done my way.”

If I ever attend a twelve-step program, that’ll be my opening line.  I was singing Frank Sinatra lyrics before I knew the song existed.  My life verse is 1 Corinthians 14:40: “Let all things be done decently and in order.”  If you trace it back to the original Greek, the term in order can literally be translated however Danny wants it.  (It’s true!  Ask any seminary professor.  Especially the ones who teach Hebrew.)

I’ve always viewed the stuff I do in life like you would view letting someone else put a baseball cap on you.  No one else can put a baseball cap on you.  It’s just something you have to do yourself.  Try it.  Let someone else put a Big Ed’s Truck Stop and Tax Prep Center cap on your cranium, and then…don’t touch it.  See how long you can go before your hands shoot up and you’re adjusting that sucker before it drives you out of your ever-loving mind.  See?  You’re a control freak too, you prideful pagan.

Now, that’s all well and good, until it comes to ministry.  In ministry, wisdom dictates that we’re not as awesome as we often think we are.  Remember Jethro’s advice to Moses?  And even though I should have learned it a long time ago, God has been teaching me a very important, yet very painful lesson over the last few years:

You can’t do it all on your own.

Here’s what I’ve learned over the last year of slowly building a structure of team leaders, two Starting Point teams, and developing an ever-growing army of interns:

Giving up control can be messy.

It hasn’t all turned out the way that I wanted it to.  There have been mistakes.  Fumbles.  Foul ups.  Miscommunication.  Mostly on my part, but sometimes on the part of my team.

But I wouldn’t trade it for anything.

You need to understand, I have a very long way to go on this journey to kill the twin sins of pride and self-reliance. Those that work closest to me will affirm that.  They can point to a half a hundred examples of where I still want it done a certain way.  They probably didn’t even make it as far as this paragraph before they started logging in and gleefully drafting their comments about this post.  (I will screen and delete those comments, of course, because their participles may dangle in the wrong place, and that’s just unacceptable.)

What I’ve learned is that expanding these teams has allowed me to expand ministry.  I’ve been shocked to find out I’m not as smart and well rounded and intuitive and impervious to kryptonite as I thought I was.

I’ve realized that the small investments I’ve made in people has allowed me to see the Connections Ministry at the Summit multiply quicker and more strategically than I ever could have dreamed, hoped, or planned for.

Maybe most tragically, I’ve looked back on years of ministry when I was simply too busy doing my own thing and running my own show to build up other leaders.  And I grieve…not because of what other people missed, but because of what I missed.

I look at the team that surrounds me now, and I think that maybe I have a glimpse of the way it could have been all along.  I get the amazing privilege of serving alongside people who can do it better, faster, and smarter than I ever could, or ever will.

And I realize…I should have given up control a long time ago.