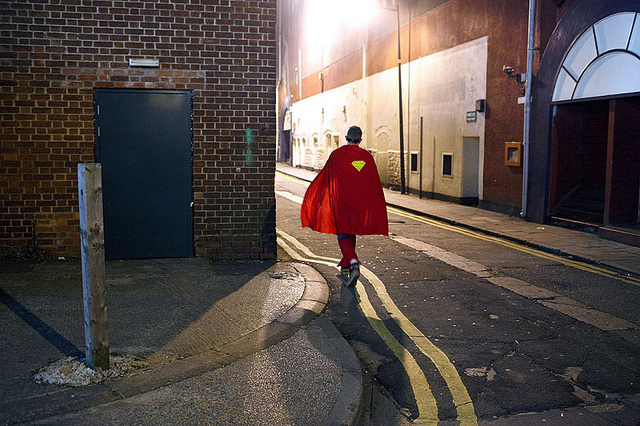 Yesterday morning I caught up with my friend and fellow Summit pastor Brad O’Brien over coffee.  If you’re new to the Summit, it might surprise you that Brad and I haven’t always carried the titles of Lofty And Exalted Ones (or, “Campus Pastors,” for short).  We haven’t always lived in the lap of luxury, eating our imported filet mignon off of diamond-encrusted plates (for breakfast, no less).  We haven’t always sported European suits made of silk threads spun by fairies.  We haven’t always driven matching Lexii (that’s the official term for two Lexuses, you commoner).

No, there was a point back in early ’03 where Brad and I were newcomers to the Summit staff, working part time and –gasp!- sharing an office.  It was seventeen glorious square feet of common space, cramped conditions (when he sneezed, I wiped my nose), and the occasional #2 diaper by my youngest son who was hanging out for the morning.  We sat back-to-back and, in the pinnacle of efficiency, e-mailed conversations to each other:

Brad: Pass me your trash can.  I need to puke.

But there was a day when Brad and I became more than office mates.  On that day, he almost made the ultimate sacrifice and gave his life for mine.  On that day, as I sat developing a master plan for the ongoing discipleship of thousands (or playing Free Cell, I really can’t remember), the tone in the office turned ominous.  Brad’s voice broke what had been the silent click-click-clicking of computer keys, and his pitch was lower than normal:

And then, in a nanosecond laced with the heroism and dexterity only displayed by a Russell Crowe-style Hollywood saga, I heard Brad leap from his chair, grasp my chair firmly by the back, and then felt myself being flung away from the epicenter of death.  My chair rolled and spun across the office (all 36 inches of it) and into the hallway as inside, I hear all h-e-double-hockey-sticks break loose.  Boards were breaking.  Things were getting flailed.  Somewhere that night, a snake mommy and daddy would be very sad.

Brad emerged, his red face and breathless stance betraying his valiant efforts in restoring order to our world.  I looked at my friend – the friend who shudders at the sight of a clown and hyperventilates when the word “midget” is uttered, the friend who cries every time Fiona is transformed from a princess to an ogre in Shrek – and I am filled with gratitude.  Until…

Me: “You didn’t get him?  How could you not GET HIM?  It sounded like you threw my desk out the window!”

Brad: “It was a glancing blow.  He slithered back behind your desk.  [dramatic pause] We have to go back in there.”

And so, with the courage and conviction of two seventh grade girls walking through a field at midnight after watching Children of the Corn, we re-entered the crime scene.  We pulled the desk out slowly, ever so slowly (mainly because it weighed 1400 pounds, but still…).  A half-inch here, a quarter-inch there.  We were prepared to come face-to-face with our foe.  Would it be a copperhead?  A rattlesnake?  A venomous cobra placed in the office by a bitter enemy?  We didn’t have to wait long for our answer, for it was then that we saw him.  We were staring death in the face, and looking into the beady eyes of…

A tiny, five-inches-including-the-tail, two ounce lizard.  Oh sure, he had bloodthirsty deeds in his little brain, but yet, he was a lizard.  And so, like brave warriors, we finished the deed.

I would like to tell you that we picked him up with the firm grasp of our bare hands and took him outside, after which we did something equally manly like chop down a tree, but no.   We took turns kicking that rascal out our door, down the hallway, through the lobby, and into the parking lot.

And then we had a good case of the reptilian shivers, because that dude gave us the heebie jeebies.

And now you know why I owe Brad my life.  Or a cup of coffee, which I bought him yesterday.  So I guess we’re even.