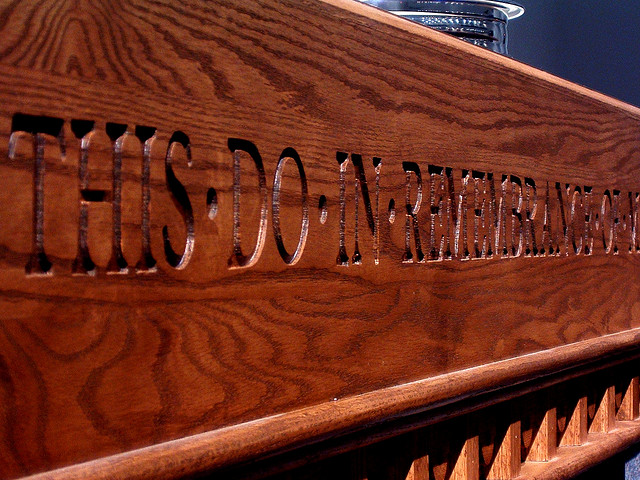 This post won’t be pretty. The squeamish should look away. And if you’re a neatnik Pharisaical type, just go ahead and start polishing your rifle, because you’re going to need it in 3…2…

As a pastor, one of my roles is to occasionally lead our congregation through the act of communion. Usually when I do that, I’ll grab my wafer and cup of grape juice (Southern Baptist wine) during our pre-service run through and set it somewhere on stage so it’s easily accessible when I get up there.

Yesterday, Pastor J.D. was about 3/4 of the way through the message when I realized I hadn’t set the elements out as normal. Since I would be leading into communion directly out of the sermon, there would be no chance to grab them before heading onstage. So I pulled out my phone and texted* our 9:00 backstage manager, a very talented guy named Nick. A few minutes later I received this reply:

“There are no cups in the green room but I have improvised. I found some red Sobe Lifewater and a cup. Hopefully that works for you.”

Obviously, I thought Nick was joking. Of course he was joking. All of the stress of wearing that headset and sitting backstage all morning had finally taken its toll.

But nope, I walked backstage, and there was Nick, holding my chicklet cracker and a cup of Strawberry Dragonfruit Lean Machine. I immediately started reviewing the theological ramifications of drinking said dragonfruit and, realizing my options were pretty limited, took to the stage, trying to shield the very pink communion wine with my hand.

You might be surprised to know that’s not the best part. Nope, the best part happened after I walked off stage. And by “best,” I mean the most horrible, atrocious, soul-crushing thing that could ever happen to a germophobe.

I thanked Nick for his quick thinking, and then said, “So where did you find the Sobe?” He simply pointed over to a bottle that was sitting backstage. A half-empty bottle. A bottle that obviously didn’t have the quality seal broken just in time to fill my tiny cup.

I drank Sobe backwash for communion.

Now that’s enough to make an Episcopalian cry. No longer was I concerned that I had violated some doctrinal boundary. Now I was worried that I was about to start yakking at any moment.

But that’s not the most horrible part.

When I arrived home last night, another staggering thought occurred: Where the heck did he get the cup?

This was our ensuing text conversation…

Me: Ok so I gotta ask. My Sobe communion cup this morning: was it new or recycled?

Nick: Do u want to really know?

Me: It’s kind of like a terminal illness. I don’t want to know, but I have to know.

So there you have it, Summit friends. Your incredibly germ-conscious pastor has once again taken one for the team. It’s not enough that I shake hundreds of hands during flu season; now I’m drinking typhoid or bubonic plague or heaven knows what else up on that stage.

*Professional texter on a closed course. Do not attempt during your pastor’s sermon.