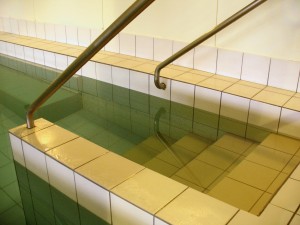 That’s really the only word that can describe this past Sunday at the Summit.  Not “awesome” as in the 80’s valley girl / surfer dude usage of the word, but “awesome” as only God can generate.

In case you’re behind the curve, let me help you catch up: for the past two Sundays, Pastor J.D. has been talking about baptism.  What it is.  What it’s not.  And why no believer is an exception to God’s command.  Baptism is for the believer, period.  And if you’re a believer and haven’t been baptized, something is missing from your spiritual walk.

Yesterday, J.D. lovingly but systematically blew every potential objection out of the water (pun intended).  At all of our campuses in all of our services, he ended his message with a simple challenge…

Stand up, take a step, and express your faith in Christ through an act of obedience.

And at all of our campuses in all of our services, 140 people did just that.

Stop.  Go back and read that again.

Lindsey is a Duke sophomore who’s been at the Summit for a year and a half.  Earlier this year on Easter Sunday, she realized that her church experience wasn’t enough…she needed Jesus.

Ridge started coming to the Summit three years ago at the persistent invitations of a Summit member.  Yesterday after his own baptism, he helped baptize his nine year old son Andrew.

Pauline is one of our incredible office volunteers.  She’s retired and rides a Harley.  She was sprinkled after being saved at eight years old, but decided yesterday that Jesus was calling her to baptism by immersion.

Abby grew up in a home where both of her parents love Jesus, but her faith is just beginning to become real to her.  She was baptized as a public declaration of her faith – and so was her sister Valerie, who just happened to be in town visiting from Indiana.

Mark and Amy have been at the Summit since January.  As husband and wife, they made the decision to take the step together.

Eddie showed up at the Summit for the first time Sunday.  So did Jennifer and Heather.  All of them heard the gospel.  They understood the calling.  And they crossed the line of faith and were baptized.

The stories could go on and on.  We had grandpas and college freshmen and great big guys and little petite girls and husbands and wives and brothers and sisters and students from Duke, Carolina, and State…all in the same water.

This morning, you can bet that our staff will be taking time to thank God for what he did.  I’d encourage you to do the same.

And by the way…if you’re reading this and you’re still white-knuckled from the death grip you had on the chair in yesterday’s service, it’s not too late.  E-mail me and I’ll get you on the list for the next baptism.  This stuff is too much fun for you to miss out.

Tune in the rest of this week for a series of posts titled, “The Story Behind the Stories.”  If you want to get to know some of the behind-the-scenes heroes who helped pull this off or you’re incredibly skeptical about an event like this, these posts are gonna scratch where you itch.

Read all of the posts in this series: