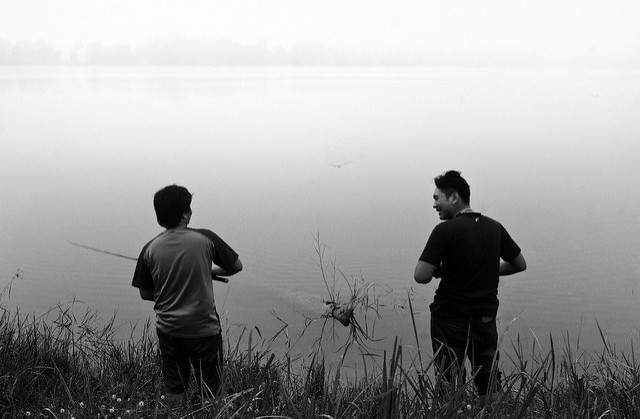 I’ve had two pretty major relational upheavals in my life lately that have left me quite shaken: my hair cut lady left the chain I’ve been going to for seven years, and my mechanic moved to Virginia.

Oh sure, that’s not a big deal in the grand scheme of things.  It’s not like my grandmother (God rest her soul) was kidnapped by warrior penguins and brainwashed to fight in the octagon.  I mean, that’s a pretty huge relationship to lose.  But my hair cut lady and my mechanic…well, that’s a close second and third.

Hair cut lady (hereinafter referred to as Tonya, because that’s her name) wasn’t a major loss.  She took another job out of the follicle realm, but she’s still cutting hair on the side (and just a little of the top. Ba-dum-bum!).  So my family and I still get to go to her.  We trust her.  We know her.  We like her.

Her old shop is still there.  They have computerized check in and trendy magazines and a soundtrack playing on the speakers and occasional $6.99 deals.  Their files on me tell them my phone number, the fact that I like a #2 clipper on the side, and I like my hair rounded in the back.  But Tonya, on the other hand, knows that stuff too.  Only without the computer.  She also knows my kids’ names, what I do, where I go on vacation, and the restaurants I love in Durham.

I won’t go back to the old shop.  I will keep going to Tonya.

My mechanic was a real blow, because he didn’t just go out on his own.  He was already on his own.  He ran his own shop and has been working on my cars for years.  When I called with a problem, if he could walk me through fixing it on the phone, he would.  And he never charged me for it.  If it was something simple at his shop, he often wouldn’t charge me for it.  And when he did charge me, he gave discounts for cash and trusted me to bring the rest on Monday if I didn’t have enough on me right then.

His old shop was bought by a former competitor.  They have more mechanics, fancy computers, printed receipts (Jim hand-wrote all his stuff), and comfortable chairs (I don’t think Jim had any chairs – I always leaned against the counter while he talked).  But I don’t know if I’ll stick with them.  I knew Jim.  I liked Jim.  I don’t know them.  And I’m not sure that I like that.

In our service-oriented, fiscal-bottom-line economy, relationships rule.  You’ll drive past a closer business to get to the one where they know you.  You’ll pay more if they remember your name.  You’ll be their biggest fan if they know your preferences by heart.

I’m glad I’ve still got Tonya, and I’m sure going to miss Jim.  But they’re both a good reminder that my job is about people, not performance, process, or product.