The recent Car for Sale post generated quite a bit of buzz.  For those of you who haven’t abandoned this blog in pursuit of better things like, oh, let’s say bedbugs in New York, here’s an update…

The SnotRocket’s successor has been named.

That’s right.  As of Friday, the Franks family has a new used car.  And by “Franks family,” I mean “me,” since my wife, kids and dog refuse to be seen in it.  My wife still drives her sporty little SUV-type thing with her fancy cupholders. 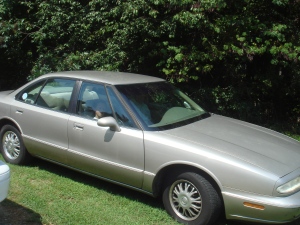 And it’s big.  This weekend I went to Chapel Hill…and didn’t even have to leave Durham.  That sucker sits in two different zip codes.  It’s trackable via Google Earth.  I had to pick up a new long distance plan just to call my oldest son, who enjoys riding in the trunk (his embarrassment knows no bounds).

And ugly?  Ugly doesn’t begin to describe it.  Some people at church on Sunday said, “Hey, that’s not so bad,” which is Christianese for “Ouch ouch OUCH GET IT AWAY IT’S BURNING MY RETINAS.”  Maybe it’s the fuzzy pink steering wheel cover I added for effect, I don’t know.  It’s like I bought this thing at the corner of Shame and Desperation.

But the best part of the new hooptie is the backstory on the previous owner.  I bought it from a cop who had bought it four months ago for his college aged daughter.  Apparently she threatened to move to an Amish community where she could seek asylum from driving such an old, large, ugly car (as if the horse and buggy would have been any cooler at UNCW), so the cop decided to get rid of it.

He purchased it from an elderly couple in North Durham.  The wife had her own car, but this car belonged to the husband.

The husband who is legally blind.

The husband who is legally blind but still made his way out to the driveway twice a week and cranked the car to keep it in good running condition.

The husband who is legally blind but still made his way out to the driveway twice a week and cranked the car to keep it in good running condition and maybe sometimes took it for a spin around the yard and bumped every single tree in the yard and now the hooptie has dings and scratches on every fender.

Hooptie Deux has a low, low 58,000 miles on it, which is approximately 262,000 trips around the North Durham backyard.  It’s got a cassette deck, which is awesome.  (True, there’s a cassette hopelessly stuck in there – probably 1930’s swing music – but still, it’s a cassette deck).  It has a working cigarette lighter, which I haven’t had in one of my cars in well over a decade, so now I can charge my phone while driving (hey, it’s the little things).

And best of all, it has an old man smell so powerfully pungent that my wife doesn’t like me to hug her when I get home and my Social Security payments will probably kick in any moment.

Which is great, because K&W can get expensive.