On Saturday my bride and I attended the Dave Ramsey Live event at the RBC Center.  It was a full day of debt-free discussions, What About Bob clips, and four dollar popcorn, which I purchased for 90 days, same as cash.

But maybe the biggest event of the day was crossing #27 off of my bucket list:  I side-hugged Jon Acuff.

If you don’t know Jon, he’s the creator of a struggling little blog called Stuff Christians Like. He has a current readership of trillions of people.  That’s right: there are more readers of his blog than there are people on the planet.  (No, I don’t know how he does it.  Mirrors would be my guess.)

So Jon works for Dave Ramsey now.  I’m not sure what he does.  Maybe he takes Dave’s money out for a walk a couple of times a day, or something like that.  And Jon had a table set up at the event, faux-hawking his books, signing autographs, and giving side hugs.

And I told Merriem that since Jon was in the same zip code, I needed an autograph and a picture, in that order. 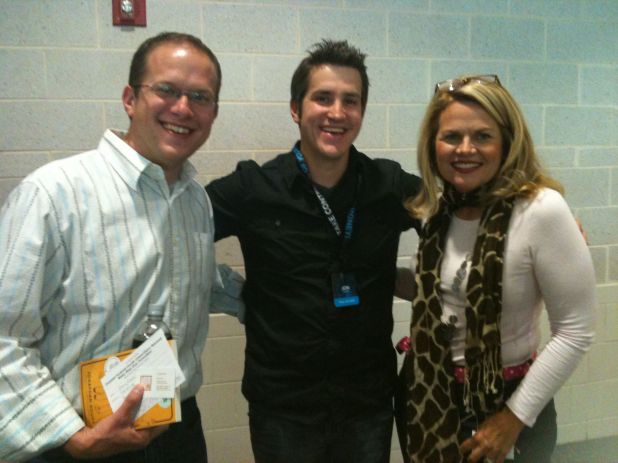 This is what a picture of Jon, Malise (aka Carolina Mama), and me looks like. (Thanks to Malise for sharing the photo, since my camera had a dust particle on the lens that made Jon look like he had a massive glowing head wound.)

I’m happy to report that Jon is a genuinely nice guy.  Sometimes when you meet celebrity Christians, you walk away with a sense of smug disappointment: “Wow, he didn’t even say ‘All the time,’ when I said, ‘God is good.’  I knew he was a big ol’ faker.”

But Jon’s the kind of guy I’d like to have coffee with.  Maybe this December. When I’m driving past Financial Peace Plaza.  Where he works.  And that would mark #81 off my bucket list.

You know, in theory.

So fast forward two hours.  The event is over, we’re walking to the car, and Merriem looks at me and says, “So who was that guy?”  I went on to explain his story about how he ripped off a blog concept and it blew up big time and now he receives verbal threats embedded in sermons from megapastors like Matt Chandler (true story…look it up).

Fast forward two more hours.  By this point we’re back home and I hear giggles coming from Merriem’s spot on the couch.  I glance over and she’s got her nose stuck in the familiar yellow book version of Jon’s blog.

“This guy…” she giggles, “this guy is really funny. You should read what he says about the smell of old hymnals!”

“Um, I’ve actually read that.”  I said.  “I’ve known about him since before this afternoon, remember?”

“Yes, yes.  It’s somewhat humorous.”  I said.  “Hey, did you know that I write a blog, too?  One that has tens of dozens of readers?  You know, me…your funny husband?”

And just like that, my wife quoted Jon Acuff more in one conversation than she’s quoted me in our nearly 18 years of marriage.  And it’s not like I ask for multiple quotes.  Just one “Well it’s like my witty husband Danny once hilariously said…” tossed into an occasional conversation would be good enough for me.

All I know is that before Saturday, Merriem thought a “Jon Acuff” was some type of fashion term (“Did you check out how that dude had his shirt sleeve rolled up in a jonacuff? That was off the chizzain.”)  Now, she won’t give me my book back.  My book that was signed to me by a guy whose blog I read that used to have a blank checkbox next to his name on my bucket list.  She’s contacting friends who do needlework, asking them to cross stitch entire chapters of the book to hang around our house.  Soon we’ll have guest towels in the bathroom that say “You’re in my thoughts and prayers.”

So Jenny Acuff, if you ever find this post, I need to ask a favor: one day I’m going to publish a book, and I’ll send the first copy to you.  It would make me very happy if you’d giggle conspicuously on your couch and yell random quotes to Jon as he’s giving Dave’s money a bath.  Especially the part where I say “faux-hawking his books” because dang it, that’s a good line.