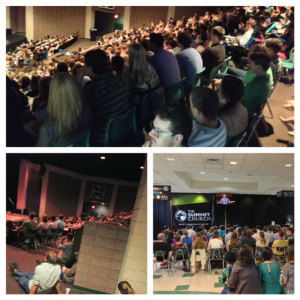 This weekend was the first of two peak attendance weekends we hit every August. It’s when our vacationing families return and our awesome college kids come back, bringing a couple hundred freshmen with them.

Side note: I’m choosing to ignore the fact that this year’s incoming freshman class was born in 1995, which is the same year I graduated college, and I just want to smack ’em in their infantile little heads with my cane and ask them to bring me more fiber.

It’s a season we prepare for every year, mainly because we know it’s coming and we want to do everything possible to keep from turning people away. We don’t apologize for crowds, because crowds are made up of people, and people are the mission.

But having said that, a crowd without a strategy is a mob. And even at church, when you run out of chairs and close down venues and ask people to scoot in for the eleventy-billionth time, it can become an angry mob.

That’s why I’m so grateful for our volunteers, specifically our First Impressions teams at all of our campuses. These people get it. They recognize that the weekend is more about outsiders than it is about insiders. They know that part of making guests comfortable means we might sacrifice our comfort.

At the Brier Creek Campus that meant 250 people who made the hike to a newly-opened venue with a smile on their faces. It was pictured in a volunteer who found a first time guest and her kids who had gotten a little lost and a lot perturbed. But Matt jumped into action, engaged her in conversation, stayed with her as she checked her children in at Summit Kids, and helped her find a seat in a crowded auditorium. Our guest moved from frustrated to grateful in a matter of moments.

At the Cary Campus, the auditorium was packed out just before the 11:00 service began. Rather than turn guests away, we asked leadership to stand up and exit the venue and give up their seats. More than 100 people graciously relocated to the lobby and worshipped there, many of them standing for the entirety of the 90 minute service.

At Chapel Hill, volunteers and leadership showed up extra early for a pre-game pep rally to make sure they were ready for the day. And those “game faces” paid off – at Chapel Hill alone we saw over 100 first time guests show up.

And on and on it went. From each campus I heard story after story of our First Impressions team and other volunteers going above and beyond to turn crowds into wows. They’re not doing it because it’s their job, or out of a sense of duty. They’re doing it because they love people and they want to make sure they’re paving the way for a clear presentation of the gospel.

And when “church people” get sacrificial for “non-church people,” it communicates something huge. It tells our guests that they’re a big deal. It tells them that we love them more than we love our parking spaces and our seats. It tells them we’re glad they showed up and we hope they come back.

What are your church people saying to your guests this weekend?