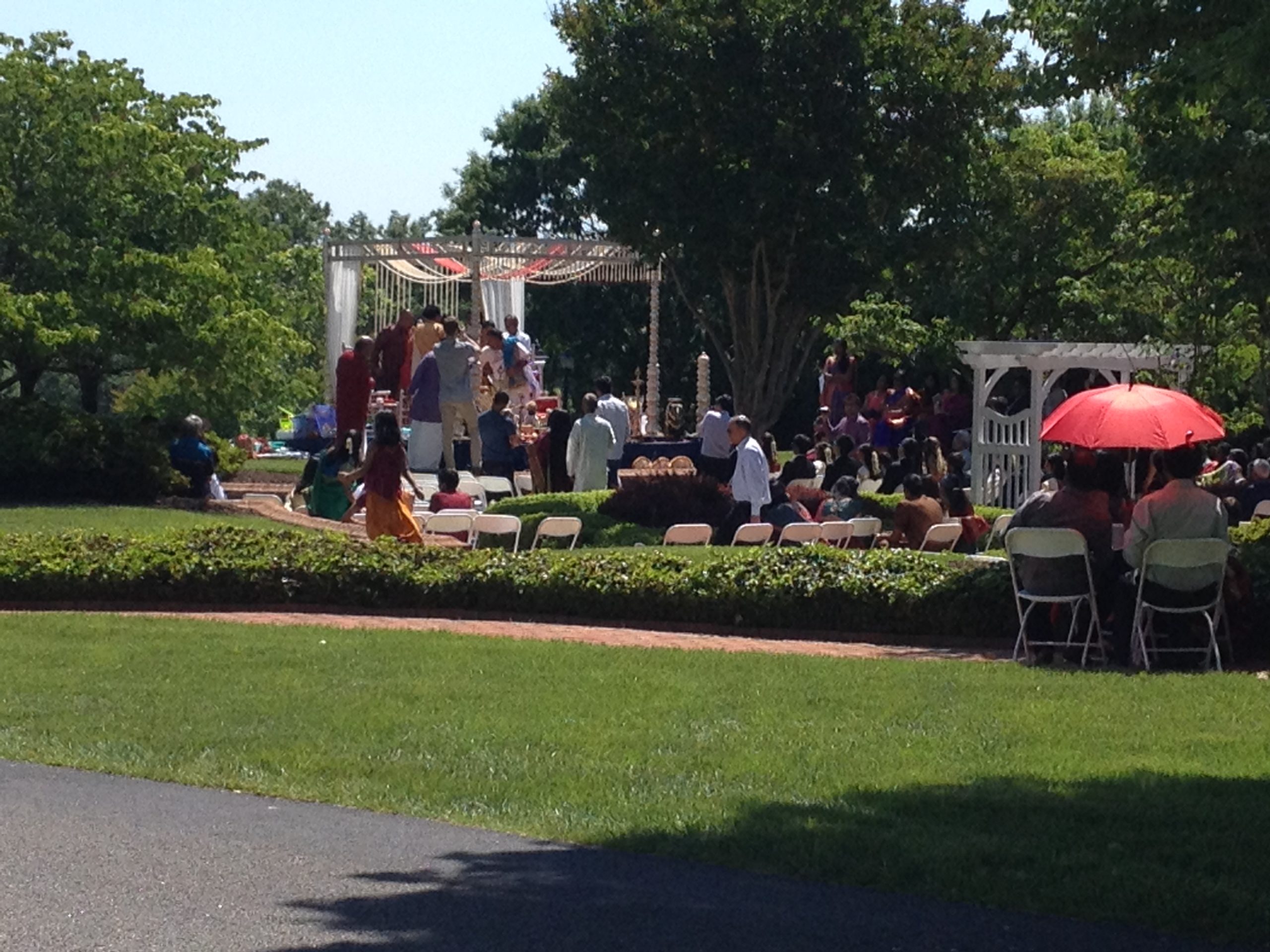 Last weekend I attended two weddings in northern Virginia. The first I was invited to: the oldest son of our seminary besties got married, simultaneously taking the best selfie that I’ve ever personally witnessed.

The second was not one that I was necessarily invited to, unless you count “invited” as “I used my spiritual gift of nosiness to watch a wedding go down at the hotel where we were staying.”

I emerged from my hotel room at about 9 AM Sunday, fully expecting to grab a cup of coffee from the hotel lobby and kick back with my Bible to get some literal quiet time. (We were traveling sans three year old, so my wife and sons were exercising their spiritual gifts of sleeping until check out.) But the quiet time never happened. I walked out into the cool Virginia morning to hear the nadaswaram rocking and to see the stage being set for a genuine Hindu wedding.

Oh sure, I knew lots of different couples who got married in lots of different churches, but all the DNA of all the ceremonies were a 99.14% match. In other words: I’m familiar with Southern Baptist weddings. I know how they work. I know what all the traditions and trappings mean (for example: butter mints mean you’re too cheap to spring for a buffet).

But a Hindu wedding? Entirely unfamiliar. That’s why I was pleasantly surprised when 9:55 rolled around and an announcer took the stage, explaining that the wedding would be commencing in five minutes and that she would be serving as an emcee of sorts, explaining what each of the traditions meant as we went along.

And so she did. From the entrance of the groom and the welcome of the bride’s family to the exchanging of garlands to the blessing of the couple by the priest, the emcee broke down every element of the service for the non-Hindu wedding guests and the non-guest / creepy pastor who was hanging out fifty feet away. While I couldn’t stay for the entire ceremony (Hindu weddings go long but my check out time only went till noon), I caught as much as I could, aided greatly in my understanding by the helpful emcee.

What does this have to do with the price of chole bhature in Delhi? Quite a lot, actually. I was struck on Sunday morning not only that I was a minority culture, but that I felt like a minority culture. I was an outsider in the truest sense, trying to make heads or tails of traditions that were entirely foreign to me. I was trading my 20 minute wedding ceremony for an all-day affair, my church gym reception with a lavish party, and I didn’t have a clue what any of it meant.

But the emcee did. And she faithfully guided us through the meaning of each element of the service. And so, as an outsider, I was able to feel a little more like an insider.

Every single weekend, someone shows up at your church with the same level of knowledge that I had at a Hindu wedding. They don’t understand communion (“Okay everybody, time to drink the blood and eat the flesh of the man who died for us.”). They don’t understand baptism (“So I went to this church, and they pushed this fully clothed guy under the water for no good reason.”). They definitely don’t understand the offering (“I told you those church people were just after my money.” / “Is it okay if I make change?”).

Churches that plan for their guests and want them to return will provide an emcee of sorts. Churches that want to make outsiders insiders will take frequent moments throughout the service and explain what’s about to happen and why. It doesn’t have to be a theological defense. It doesn’t have to be an extended soapbox. It just needs to convey the value of the moment and the value of the guest.

It’s time to grade your service: how do you address the wedding crashers?