Stop and Watch the Sun Rise

Not long ago I was out west for a conference. You need to know that I haven’t spent that much time “out west.” There was that one time in Texas, and another time in California, but I think it sounds so cool that any time I pass Knoxville I’m going to start referring to it as “out west.”

But I digress. The other tidbit that’s important here is that I’ve developed an out-of-town habit of waking up early and watching the sun rise. I’m not sure when that began to officially transpire in my life. Perhaps it started more with a response to jet lag (“Hey, I’m up anyway. Might as well be reflective and junk.”). All I know is that 14 year old me would be terribly disappointed in 41 year old me for wasting a perfectly good opportunity to sleep in.

But there I was a couple of weeks ago on the outskirts of Phoenix, a venti cup of house blend in one hand and iPhone camera in the other, standing in the desert waiting on Mr. Sun to come over the horizon. (Never mind the fact that the “desert” was just a 12 minute drive from my hotel; my host told me that it was officially the desert, so that’s what I’m sticking with.) The saguaro cacti stood tall against the fleeting night sky, a band of coyotes yammered in the distance. I wrapped my jacket a little tighter and clutched my coffee a little firmer as I waited…waited…waited…

The sky turned from black to gray to pink to orange. Birds turned up the volume on their symphony and the night’s chill gave way to morning’s warmth. The moon held its own on the other side of the horizon, gradually yielding to his daytime counterpart.

And then…the sun. My wide-eyed wonder turned to a squint as the brilliance spilled over the edge of the earth and stretched out across the rough terrain of the desert. Shadows began to stretch out low and long behind me and behind the surrounding flora.

It was, in a word, breathtaking. 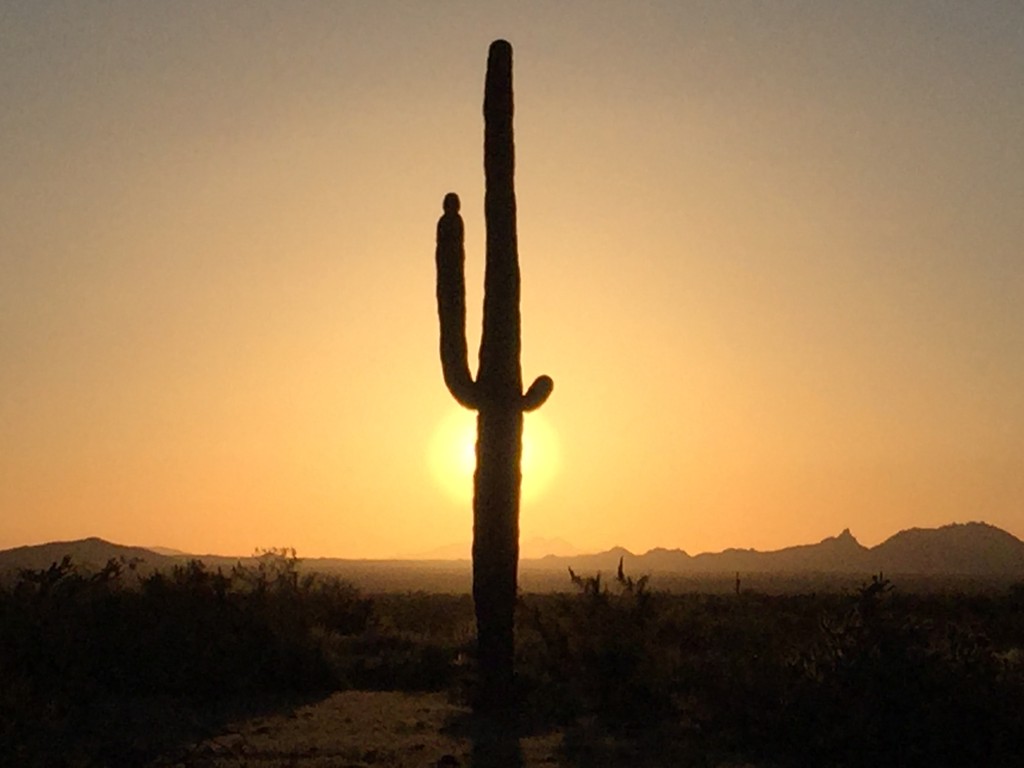 Let me interrupt this narrative to explain that I’m not what you’d call an outdoorsman. My idea of roughing it is a hotel with no ice machine. But that sunrise…that sunrise got to me. I nearly ran a lap on behalf of my Bapticostal brethren. To think that God created all of that. That he set the sun in place and charted its course at the beginning of time. In Jesus all things were created and in him all things are held together. Well, it’s enough to make you have a mountaintop experience in the desert.

So much so that I woke up early the next two mornings and did it all over again.

From Malaysia to Maine, from the beaches of North Carolina to the deserts of Arizona, and all parts in between, I’ve made it a habit to wake up early and see the sun rise. There’s something about the majesty that is in itself an experience of worship of the Creator.

But go with me to my first morning, post-conference, back in North Carolina. I’m an early riser here, too, but more out of necessity than a nature lover. And typically I’m on a school carpool run and a work commute at just about the time that the sun is coming up over downtown Durham. But there I was, barely 24 hours past my personal worship service in the desert, noticing the glare rather than the glory: “Good grief that thing is blinding flip the visor down I CAN’T SEE A THING this is RIDICULOUS…”

The same sun rises on Durham and the desert. The same brilliance ushers in the day, the same heat warms my surroundings. It’s as predictable as…well, as the sunrise. But where I’d made room for one sunrise, I’d ignored the other. And I missed the splendor.

You already know where I’m going with this, don’t you?

We’re constantly surrounded by the glory of God. His majesty, his brilliance, his splendor, his beauty…it’s everywhere. It’s ever-present. It never ceases, because he never ceases, and his first priority is his own glory.

But we don’t always make time for it, and therefore we don’t always see it. You see, much of the time we interpret God’s glory through our feelings: we get a warm fuzzy in a worship song, and we say God showed up. A chill runs down our spine when a missionary tells a heartwarming story, and we know that God was with him.

Yes. But no. We don’t get to filter his glory through our feelings. His glory is always there. It’s not elusive. He’s not hiding it from us. We just don’t take the time to notice it. We go about our day and get on with our lives and reach for the visor rather than pause to see God for who he is.

So look. Look at the glory of God. Look to Jesus. Rather than sequestering his glory to a special occasion, stop and look at it every single day. Savor in it. Bask in it. Let the brilliance of his glory fill you, surround  you, encompass you, envelop you.

Maybe it’s time to stop and watch the sun rise.