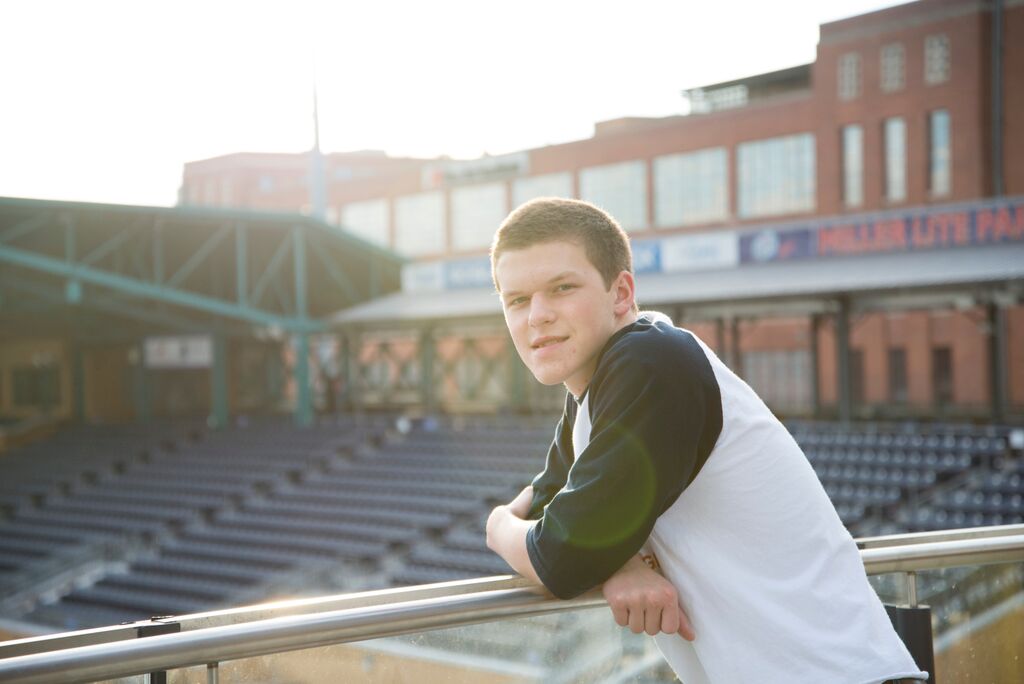 It’s a text that a parent is never quite ready for.

I was sitting in a meeting yesterday afternoon when the familiar “ding” escaped from my phone. Noticing that it was a message from one of my sons, I peeked. He’d sent me a photo, and there he stood: a selfie-in-a-mirror. A man-child staring back at me. An eighteen year old who shouldn’t be that old.

It was Austin in his cap and gown.

Oh sure, I’ve known that he’s been at graduation practice for much of the week. I’ve seen his pomp and circumstance duds hanging in his room. We even talked him into putting on the gown last week to get a picture at his baby sister’s preschool graduation ceremony.

But this…this was too much. Reality struck. And tonight, it will strike again, even more vividly, even more shocking, with even more tears.

Austin is my second-born. Regardless of what you might think from the shenanigans on this blog, he’s the real comedian of our family. He’s been funny since before he could talk. As a preschooler, he had an impossible mop of curly hair on top of a chubby little head. He was always smiling, always giggling, always vying to be the center of attention, always leaving a mark.

And by “leaving a mark,” I mean that he was always…always…biting hunks of flesh out of his big brother. (“MOMMEEEEEE! YA-YA BITE JJ!”)

That was Austin. Our Ya-Ya. He has been undeniably mine from the day we brought him home from the hospital. “Spittin’ image,” is what we’ve heard countless hundreds of times. As he got older, he traded in brotherly assaults for back seat reading. We used to joke that Austin never knew where we were on the road because he always had his nose in a book. He’s been a Tarheel since kindergarten, an entrepreneur since elementary school, and an accident-prone baller and faller for as long as I can remember. He’s never lacked for confidence and never ceased to make us laugh.

And tonight, he graduates.

His mom and I will sit in a dimly-lit auditorium, watching the requisite baby photos scroll across the screen before the ceremony begins. We’ll exchange knowing grins and glistening eyes with other parents who have been on this journey with us. Some of them we’ve known for much of Austin’s academic life. And as he walks across the stage with these long-time friends, we know that he knows it might be the last time he sees some of them.

He came to that realization a couple of days ago. When he walked out of his high school for the last time, it was as if a door closed on a part of his childhood and a chunk of his history. We briefly talked about it that night (you don’t talk about anything for more than “briefly” with a teenager during graduation week), and I could see the gravity of it all beginning to settle in.

Sure, he’ll spend the next two years getting his basics out of the way at a local community college, and he’ll still come home at night to his bed and our food, but the next chapter has started. And try as we might to slow down the clock and hang on to the past, we can’t. We shouldn’t. It’s time to step forward, and it’s time to celebrate.

On Monday morning, he’ll wake up not as a student, but as a full time summer worker. Who am I kidding…he’s been full time at his Chick-fil-A job for at least the past year, regularly logging 40 hours and climbing up the chain at a chain he loves. But on Monday, he’ll do it not as a high school job, but as part of an actual career.

I can’t quite articulate all that I feel. This is the bittersweet day that we’ve prepared for since the ultrasound, but we’re never quite prepared for. We trust that the same Jesus who began a good work in our son will be faithful to complete it. Our parenting style will now begin the shift from authority to influence. And as my son enters adulthood, I look forward to not only having a son, but having a friend.

I love you, Austin. Congrats on turning that tassel.