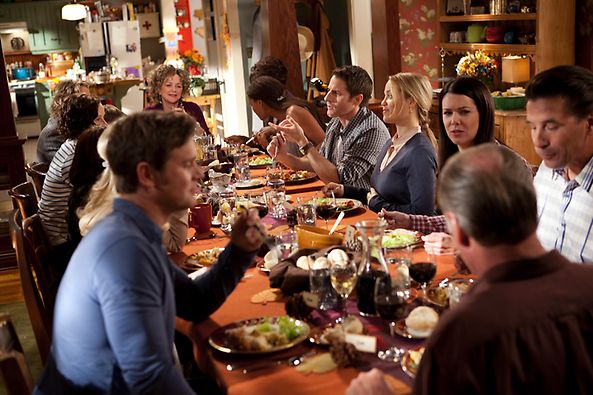 As I type, my wife Merriem is watching a Parenthood marathon on TV. Yes, that Parenthood: the series that went off the air in 2015, the one she’s already watched in its entirety and then some, and the one that gave her – as the hip ladies like to say – all the feels.

Which is why I fully expect this post to gain not so much traction as it will an enormous amount of hate. Just as one does not simply walk into Mordor, one does not simply critique the Braverman family without gaining at least a couple of death threats. (Or at least taunts on social media. Same same.)

It’s because they talk over each other.

If you’ve seen the show, you know exactly what I mean. There is rarely a time when characters simply take turns with the dialogue. No, they pile on one another’s sentences like a pack of dogs on a t-bone steak. Their words interwine like a half-dozen octopuses playing a cutthroat game of Twister. A family meal at the Braverman table is perhaps the most stressful thing that’s ever happened in the history of television, because everyone is talking at once, there’s no cohesive train of thought, I have no idea who I’m supposed to listen to, and it makes me want to slam my head into a wooden plank.

As Merriem is watching the verbal acrobatics go down at the dinner table, it occurred to me that there might be an analogy to be drawn in regards to our churches. When people peruse your website, walk onto your campus, or attend your services, how many messages are they getting? When they listen to announcements or read the bulletin, where are their ears, eyes, and attention drawn? Are your ministries competing for first place like a bunch of Bravermans over brunch?

I’m not advocating that every ministry and event simply take turns (though I’d love to see that with the fictional family in question). I recognize that it’s not as easy as politely waiting to be heard. But neither is it easy for our guests to sort through the noise and interpret what they’re supposed to hear; to pick apart verbal missives and hope that they’re choosing the right conversation to listen to.

Suggestion: analyze your services this weekend. Take a look at your worship guide, scroll through your website, and listen closely to the announcements. If you find anything to be a little bit Braverman, be the braver man (or woman) and introduce some clarity.