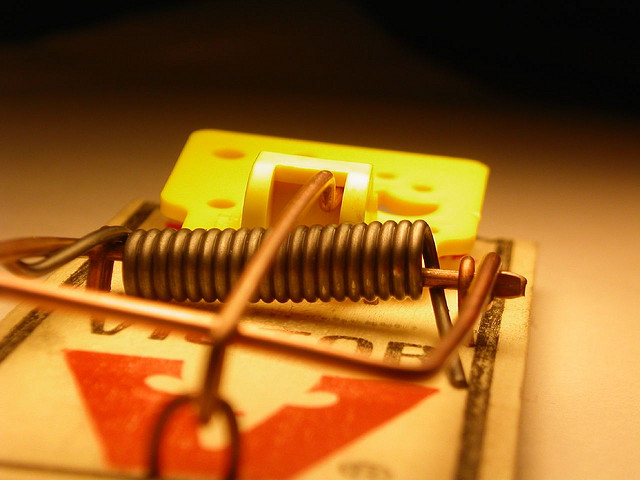 Nothing good ever begins with the words “Don’t…anybody…move…”

And yet, those fifteen letters are what started the entire adventure last Friday night. It was sometime after 11 PM. The whole family – sans the Princess – was up way too late, hanging out in the living room watching Monk reruns and playing on iDevices.

And then Jacob, our 17 year old firstborn, said those three terror-striking words, bringing the night of merriment and mirth to a screeching halt.

My wife, who has never adhered to those three words out of sheer obedience but only abject terror, whispered like a camper in a Friday the 13th movie: “WHAT IS IT? WHAT DID YOU SEE?”

Jacob had seen the newest guest at the Franks household: a smallish field mouse that somehow found his way into our fireplace, from which he decided he’d emerge.

When I should be in bed.

But I wouldn’t be.

For a very long time.

Merriem has never been known for her athletic prowess (that’s one of the reasons we go together like peas and lazy carrots). And yet, at the mention of “mouse crawling out of a fireplace,” she leapt straight up off of the couch as if she’d been ejected from an abandoned fighter jet and catapulted herself backwards into the kitchen, where she landed on the countertop with the dexterity of Mary Lou Retton, circa 1984.

That’s where I snapped the picture. That’s where she stayed for the next 30 minutes or an hour or three weeks, I can’t really be sure. It could be because I was distracted with the following helpful comments:

Me: “Well babe, that’s sort of the plan. I wasn’t going to domesticate him and ask him to apologize for the trauma he’s caused.”

Me: “Getting my phone. This is going on Twitter.”

She: “DANNY FRANKS. DO NOT TELL PEOPLE WE HAVE A MOUSE IN OUR HOUSE.”

Me: “Um, is that your phone? What are you typing?”

She: (no longer speaking in caps) “Putting the picture you took on Facebook.”

Me: [intentionally overlooking the irony in order to avoid death]

She: (shuddering with her every-30-seconds case of the violent willies) “What are you doing now?”

Me: “Trying to find him. Nobody saw him go back into the fireplace. He’s probably hiding behind the TV.”

She: (going back to caps to stress the severity of the situation) “YOU ARE NOT GOING TO CHASE THAT THING AROUND THE KITCHEN. SO HELP ME IF IT RUNS OVER HERE I. WILL. KILL. YOU.”

She: “HAVE I TOLD YOU ABOUT THE TIME THAT MY BABYSITTER HAD A MOUSE IN HER HOUSE AND WHILE SHE WAS SLEEPING IT RAN ACROSS HER FACE?!?”

At this point, it was all over. I laughed harder than I’d laughed since – well, since ten minutes earlier when she pole-vaulted to the kitchen.

That didn’t help matters, if you get my domestic altercation drift.

The next half hour was filled with exactly what you think it would be filled with: four Franks men wandering around the house with weaponry and blue face paint shouting “FREEEEEEDOMMMMM” and trying to track down and inflict damage on our rodent friend. And also gently tossing mouse-sized objects in the direction of our wife and mother, who was so busy having multiple heart attacks she didn’t even notice.

We were also Googling questions about how mice get into fireplaces in the first place. Did they crawl onto the roof? Did they use very tiny ladders? Were they simply recreating the chimney sweep scene from Mary Poppins when things got out of hand?

And the biggest question…how could we get rid of them? The collective answer from The Internet was steel wool. Steel wool? Yes. Steel wool. It told me to take steel wool and shove it up into the chimney flue. Apparently our particular mouse was frightened as a young child by a robotic sheep.

I scoured through the garage for every trap I’ve ever owned, positioning them in a stockade across the fireplace. No mouse was getting in. No mouse was getting out. And then I gave my panic-stricken bride a piggyback ride across the kitchen and then performed a search-and-destroy mission throughout the bedroom, just in case Mickey had made it that far. She took a sleep aid or perhaps drank hard liquor for the first time in her life. I can’t be sure.

The next morning, I awoke to the sight of my fallen rodent comrade. The smell of Jif peanut butter had proven to be too much, and he stepped into eternity from the launching pad that is my fireplace.

Sadly, the death of one did not make up for the fact that THERE MAY BE MORE. So that evening I bought even more traps, ensuring that every corner, crevice, entrance, and square inch of our house is adequately covered with the very real possibility of spring-loaded death.