We Send Our Best 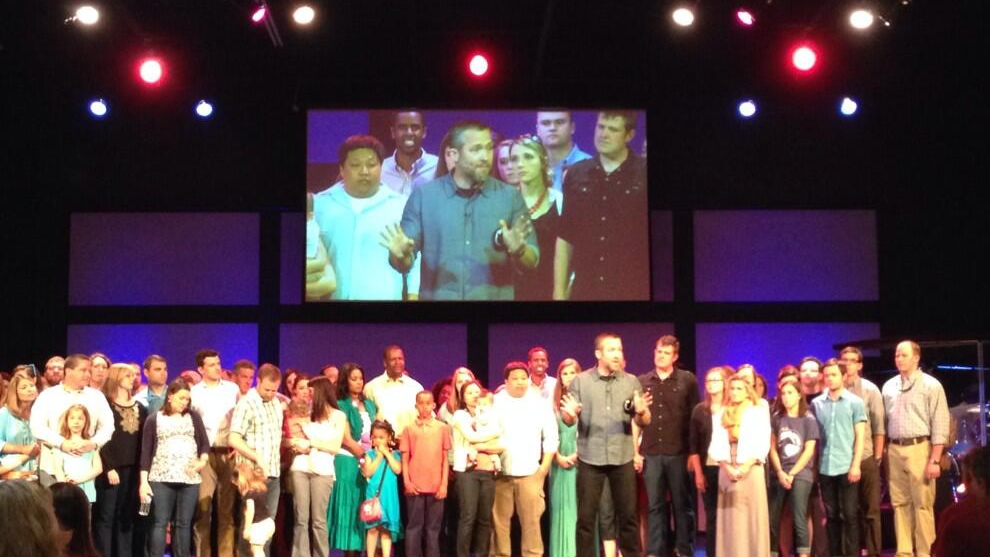 This weekend the Summit commissioned 108 people to four North American church plants. Over the next few weeks we’ll be seeing these folks move to D.C., Wilmington, NC, and two locations in Durham. Our Summit Network has been training up the lead pastors of these plants, preparing them in part for the rigors of planting a new work.

In full disclosure, not all people on stage were covenant members of the Summit. We were missing some of our covenant members who are going, and in their place Grace Park Church and Waypoint Church both had part of their core teams that were there. But the majority of people standing on that stage have been an integral part of life at the Summit. We’re sending pastors and interns, worship leaders and elders, First Impressions and Summit Kids volunteers, college students, older people, younger people, married couples, singles…you name it, they’re going. People have given up jobs, sold homes, given sacrificially, and poured out their lives to see the gospel go forward in new places.

At the Summit, one of our plumblines is We send our best. We don’t want to be guilty of hoarding talent or gifts; we recognize that God gives us great people so that we can give them back as a faith offering elsewhere. But while we’ve said that now for several years, this weekend I felt it in a real, tangible way.

Two of the men standing on that stage represented the best of the best. Josh Lawrence and Clayton Greene have been my fellow pastors, team members, and personal friends for the last several years. When they made the decision to be a part of The Bridge Church in Wilmington, they represented 50% of my Connections team. One-half. Two out of four. However you do the math, that’s a chunk of “best” that is heading out.

Josh was my First Impressions Director in our Brier Creek South venue, and held down a side role as my Special Events Coordinator. That’s a lot of hats for a guy workin’ intern hours. Nobody thinks through the logistics of an event and gets volunteers where they need to go quite like Josh. He was the calming force to crazy moments, the unsung hero of all kinds of behind the scenes magic, and just simply got the job done. In addition to that, he served as the small group leader to my two oldest sons for several years, so Josh is a part of our family’s fabric.

Clayton was the First Impressions Director in Brier Creek North, and the evil genius behind a tremendous amount of the “why behind the what.” Clayton has suffered through – and subjected me to – hours upon hours of conversations on why we do what we do, how we do what we do, and how we can do it much, much better. We’ve never met a whiteboard or a blank sheet of paper that we couldn’t fill up with ideas we just knew would change the world. I never walk away from a conversation unchallenged or discouraged. He gets guest services at the heart level like no one I’ve ever seen, and he wants to do whatever it takes to help people take a step towards Jesus.

Send our best? Yes we do. My buddy Ethan Welch, lead pastor of The Bridge, is getting the cream of the crop, as is Waypoint, Grace Park, and Restoration City Church. Whenever we send our best, we are making a sacrifice. There’s no way around it. There are tears. There are losses. There are real, gaping voids that are left behind.

But here’s why sending our best is vitally important: I’d rather give away good people than get greedy with good people. I’d rather see the gospel take root in new places than just build a deep bench of talent in RDU. I’d rather lose geographically-close friendships if it means seeing friends use their gifts to do some serious damage for the kingdom in another city.