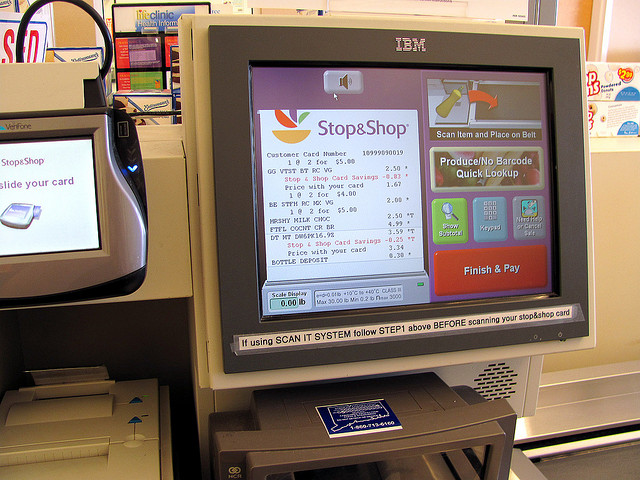 Saturday night. I had dropped by the grocery store on my way home from church. Cough drops, ice cream, Diet Coke. It was a tiny little list, just right for the self-checkout line.

Except the self-checkout line wasn’t having any of my nonsense. The total was six dollars even, and I just so happened to have a crisp five and a pocket full of quarters.

The five went in. So did the first quarter. And then the second one dropped, but didn’t register. Neither did the third one. Or the fourth.

And so I called for help. The self-checkout lady sighed as though I had asked her to repaint my living room. She slowly moped her way over, shrugged her shoulders, and said, “You just gotta hit it.”

And so I hit it. I felt like the grocery store police were going to yell at me, but what other choice did I have? Self checkout lady said to punch the machine, so I did.

The quarters fell. I tried again. They stuck again. I hit the machine again.

I didn’t realize that a small, appreciative crowd had formed behind me. “That guy is an idiot,” I’ll bet they were thinking, “But I’ll give him this, he doesn’t give up.”

Well yeah, because that’s all the cash I had and I needed that two liter Diet Coke.

It was at that point that two guys in their young twenties began a running commentary on my plight, and while I at first thought they were mocking me (as well they should), I eventually heard one of them say

“That girl. The self checkout girl. Shouldn’t she be punching the machine? Isn’t that like her job or something? She’s making that guy do it!”

And you know what? He was right.

It wasn’t my job to punch the machine. The machine’s job was to process my payment. When the machine went down, it was the self checkout lady’s job to fix the machine, or at least make an attempt. But instead, she made it my job.

I have no problem with punching a machine. (I would’ve eventually probably done it out of frustration, anyway.) But that’s not the point. The point is that my checkout line friends were right: it was her job. It wasn’t mine.

My self checkout lady? Well, she checked out. Do your volunteers do the same for your guests?

Do they know their job?

Do they do their job?

Or do they effectively say, “It’s not my job?”