Letting Your Rep Take The Rap 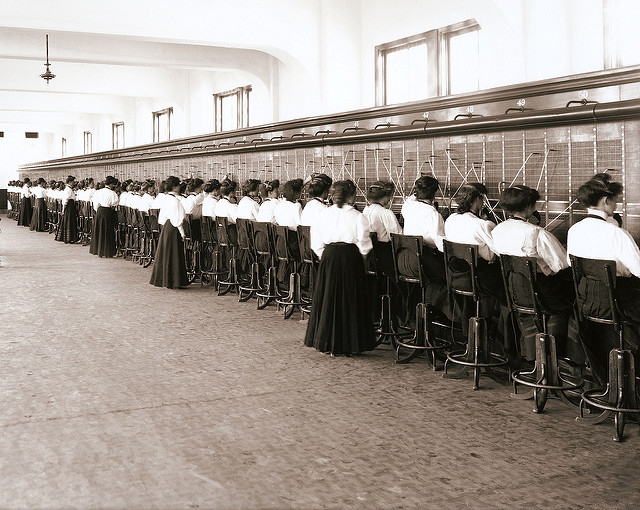 Over 50 women telephone switchboard operators and their supervisors. During this period (circa 1914), only young women (not men) were hired for this type of work at a Salt Lake City, Utah company. This photo was scanned from an 8x10 glass negative contact print.

I’m not saying it was one of my prouder moments.

I recently opened the email that heralded the arrival of my monthly cable bill. One glance told me that something was fishy in the state of Denmark. The bill – already sky high, in my opinion – had jumped by $30 per month with the start of the new year. I was incensed. Outraged. “Oh no they di’unt” status.

So I made the dreaded phone call. Vented my frustration in a rather loud way. Told ’em that I was sick and tired of being sick and tired, and they weren’t going to have Danny to kick around no more. While I waited to be transferred to another department (“Oh no they di’unt” again), I geared up with another round of self-righteous reasons why they were the evil cable galactic empire and I was a lowly member of the consumer rebel alliance, trying to set everything right in the universe.

Like I said, not one of my prouder moments.

But then I talked to Lori. Lori patiently listened. Empathized. Told me that her cable provider (not the people she worked for, ironically) frustrated her too. That a price increase of that magnitude was unacceptable. That she was going to reduce my bill by $45. (Mind you, I was already paying $30 more, so I was only saving $15, but still…) And as Lori talked and smoothed and soothed and schmoozed, I had time to reflect on what I jerk I’d been.

As a pastor, I feel like I should let you know that I ended the phone call with an apology. I told Lori that I knew it wasn’t her fault. She doesn’t set the rates. She didn’t jack up my bill. She doesn’t charge more for less service. I empathized right back that I know she works in a cube far from headquarters and she didn’t deserve to hear complaining whiners like me all day long. She laughed, forgave me, and we hung up on good terms (or at least I think we did. For all I know she put me on the Jerk Caller Wall of Fame in the cafeteria.).

But after the phone call, I got mad all over again. Not at Lori, but at Lori’s employer. And not because they’ve doubled my bill since I became a customer four years ago, but because they’ve created a culture where the Loris in their call center have to take abuse from people who are furious at the company. We can define “company” however you’d like: executives. CEOs. The snowball effect of shoddy service and high prices. The faceless, nameless enemy that has come to represent Big Cable or Big Utility or Big Cellular in our world. And because companies can be faceless and nameless, they cause those on the front line – those who do have a face and a name – to become the punching bag for all that is wrong with the company culture. They even develop customer retention plans to they can hang on to the people they know they’re going to alienate. They take a shoddy corporate personality (a term coined by Shep Hyken) and make an innocent bystander represent that personality.

If you’re in the customer service (or guest service for churches) world, let me ask you this question: are you letting your rep take the rap? Does your organization’s “corporate personality” stink? Do you hide behind systems and policies and let your front line pick up the pieces? It’s far better to fix a bad organization than to force someone to represent a bad organization.

Don’t make your reps make excuses for you. Be the kind of organization that people are proud to represent, to showcase, and yes…even to defend. It’s better for you, better for your front line, and better for those that you serve.