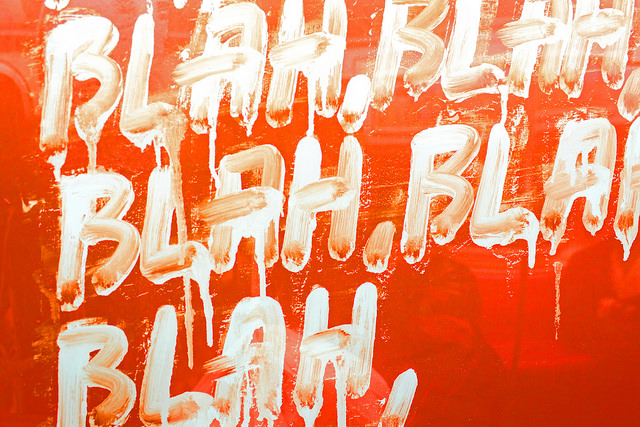 My pastor is fond of a particular saying:

When you are sick of saying it, the leaders in your ministry have probably just heard it. When your leaders are sick of hearing it, then everyone else has heard it for the first time.

I’ll avoid the temptation to mention that I’m kind of sick of hearing this (oops), but the principle is oh so true. If you want to boil it down to the three-word essence, here you go:

I was reminded of this in a recent conversation with a volunteer. This guy is faithful and dependable, one of those long-serving and long-suffering people you want to have on your team. As we talked, he brought up the need for more volunteers. I casually mentioned that even with all of our stage announcements and on-boarding systems, shoulder-tapping is still our best method to invite new vols to the party. And to that, he replied

“Huh. I’ve never really thought about it that way before.”

Now, let me rewind the conversation a few seconds. I almost didn’t mention shoulder-tapping because I assumed that was already a part of my friend’s vernacular. I thought it was something he was already living and breathing. I knew that I have used the shoulder-tapping verbiage hundreds (maybe thousands?) of times during my time at the Summit. I’m confident that he’s been in a training where I’ve said that exact same thing. But I went for it, and I’m glad I did. Because after all…he’s never thought about it that way before.

I’ve been replaying that conversation in my head, and here are a few thoughts that have bubbled up for me as a leader. Maybe they’ll carry some weight for you, as well:

1. Not everything you say is memorable. That hurts my feelings, but it’s true. Maybe I didn’t deliver it with enough passion. Perhaps I didn’t hone the sentence carefully enough. If it dropped through the filter the first time around, then I have to say it again.

2. Not everything you say is absorbed. When I think about trainings that I lead, it’s a lot of content. A lot. Of content. I know that my own learning style doesn’t lend itself to grasp every detail of what I hear. Why should my hearers be different?

3. Not everyone is ready for it the first time they hear it. My buddy is a whip-smart guy. It’s not that he wasn’t listening the first time I said it, it was that he didn’t need that info at the time. Now that he needs it, he heard it and (I’ll bet) will act on it.

4. Not everyone was around the first time you said it. As long as you have new people in your ministry, you have to repeat the vision. We fall prey to what Chip and Dan Heath call “the curse of knowledge.” Because we  know it, we assume everyone else knows it.

5. If it’s worth saying once, it’s worth saying multiple times. For far too many years, I wanted creativity to beat out clarity. I never wanted to use the same illustration twice. I wanted each message to be a brand-new, mind-blowing, earth-changing truth. And then I realized: I’m not nearly that good. Instead, I took a cue from leaders and communicators that I respected, and began to beat the same few drums over and over again. That doesn’t mean that we never vary our subject, but it does mean that a good teaching point shouldn’t be said once and shelved away.

When you are sick of saying it, your people are just hearing it.

What are some of your favorite repeatable phrases as a leader? Join the fun. Comment below.