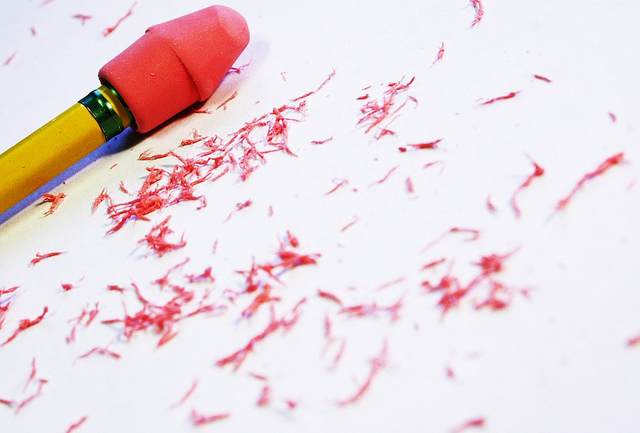 It’s day three of You Blew It Week.  Start the party here.

Sometimes I feel like a professional screw up.  It’s true.  As a guy who generally has his stuff together and is typically organized, there are times when I shove ten pounds of mistakes in a five pound sack.  (No, you can’t borrow my top secret scale for weighing your mistakes.  Patent pending.)

For example, I entered the week with this topic already lined up.  I was already going to talk about blowing it, because I felt like – for once – things were going well.  Then came Monday.  On Monday, everything that could go wrong did.  Everything that could be messed up was.  Every mistake that could be made was made.  Stuff had broken on Sunday.  Teams had fouled up on Sunday.  Systems had gone wrong on Sunday.  And the common denominator in every last one of them seemed to be…me.  It was almost as if God said, “Your writing material needs more examples.  More heart.  Maybe not so much cowbell.”

One of the first steps to fixing your life or ministry or whatever after you’ve blown it is to ask one question: “What went wrong?”  What caused what happened to happen?  What were the particular catalysts for disaster?

Sometimes your screw up is a one-time fluke.  To spend any energy whatsoever in fixing the fluke would be wasted.  You apologize and then you move on if the chances of a recurrence are next to nothing.

But if it’s an easily-identifiable problem, it’s typically going to be a people issue or a systems issue.

People issues tend to revolve around personality, personal errors, or simply a bad day.  On Sunday I had way more than my fair share of people issues.  Key volunteers didn’t show up and failed to let me know.  One team member got a little snippy with another.  3/4 of my leadership team happened to be out of town on the same day.  I over scheduled my morning and couldn’t be everywhere I needed to be.

People issues are tricky, and you should identify patterns before you call it a problem.  If one of my volunteer’s car wouldn’t start and her dog threw up on the carpet and her daughter got a Lego stuck in her nose before she left for church, then I’m going to overlook the fact that she showed up late, if she showed up at all.  If she shows up late every single Sunday, that’s a pattern that needs to be addressed.  And her daughter needs to stop snorting Legos.

Systems issues often involve people, and often occur when people make mistakes because the process makes no sense.  We’re smack in the middle of overhauling our First Impressions systems.  Our team and responsibilities have grown so large that individual teams don’t know where their job ends and another team’s job begins.  It’s not the people’s fault, it’s the system’s fault, so we’re going all out to fix the system.

Systems issues seem more cut-and-dried, but we have to remember that systems are there to serve the ministry, not the other way around.  Systems should make the job easier, not harder.  Systems should free us up to be better volunteers or pastors or friends on any given day instead of making us drown in details.

Here’s the difference between people and systems: you should be brutally ruthless with systems, but you must be mercifully kind with people.  We take no prisoners with our systems.  We scrutinize, study, tweak, kill, destroy, rebuild, you name it.  With people – and especially with volunteers – my goal is to assume the best.  Did I miscommunicate?  Did they misunderstand?  Is there a bigger story going on in their life?

The next time you blow it, ask what went wrong.  Identify the issue as people or systems.  Fix it.  And move on.