4 Alternatives To The “Turn-And-Greet” Time 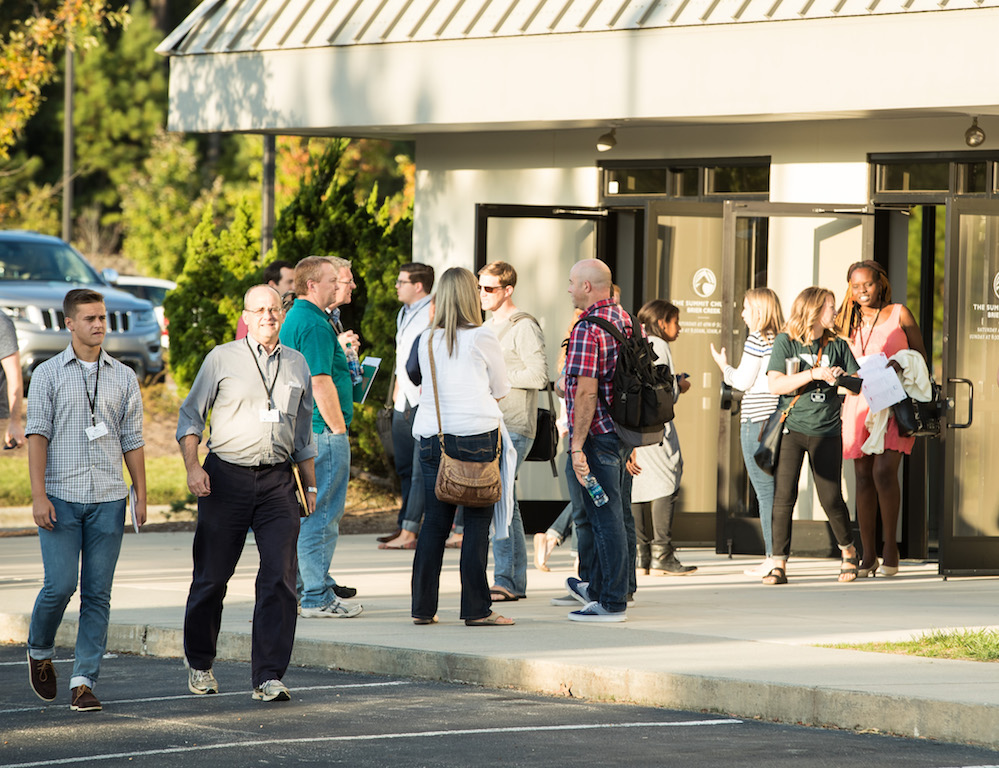 In a recent post I set off a firestorm about the dreaded “turn-and-greet-your-neighbor” time that we unleash on introverts, germaphobes, and outsiders. The truth is, there are valid opinions on both sides of the aisle (#DidYouSeeWhatIDidThere). The pro turn-and-greet crowd views it as a way to foster fellowship in a congregation and encourage people to talk to old friends and meet new ones. The please-don’t-make-me crowd views it as an awkward dance or a contrived way to say “See! We’re such a friendly church!”

I played my hand in the “reasons not to” post and told you that I am solidly in the latter camp, but I appreciate what my brothers and sisters in the Triple H camp (Hugs, Handshakes, and High Fives) want to accomplish by encouraging us to talk to one another. So in a spirit of bipartisan unity, let me offer up four alternatives to the “turn-and-greet” that will help you accomplish the same thing…only without sending the introverts diving under their chairs.

Encourage organic greeting. I was having the turn-and-greet conversation with a pastor friend in another church, and he indicated that this seems to be more of a generational issue in their congregation: “Some of our older members still want to stand up, find someone, and shake their hands.” I appreciate that mindset. And if you are considering getting rid of the turn-and-greet, you’d better appreciate it as well. There will always be congregants who hold this time dear. And it’s not just older members…I know quite a few in the younger set that love it. (Maybe they’re trying to get to the Werther’s mints they know the older crowd keeps in their pockets, who knows?) But the point is, just because you do away with the formal greeting time doesn’t mean you’re doing away with greeting. In fact, having a stranger approach you before or after the service will mean more to a guest than a time when they feel like people are being compelled to talk to them.

Employ a “tell.” I’ve long been a proponent of a First Time Guest gift bag, and not only because it’s fun to surprise and delight people. We use our FTG bags not just as a gift, but a marker. In a large or rapidly-growing church, it’s often hard to figure out who’s new. I’ve been guilty of re-introducing myself to the same people again and again, which can be annoying to them and ultimately demoralizing for me (if I think I’m about to embarrass myself, then it’s probably just easier not to introduce myself). That doesn’t have to be the only option. When I see a FTG bag, I can know with 99.9% certainty that they are actually a first-time guest. So how do you make this work with your seasoned attendees? Take opportunity of times when guests may not be present (members’ nights, business meetings, etc.) and talk about the bag. Every time they see a bag, that’s their signal to introduce themselves and make an outsider an insider.

Consider Zone Greeters. For the last few months we’ve been experimenting with “Zone Greeters,” undercover First Impressions team members whose only job is to meet new people and then help those people meet people. I’ll develop this more fully in a future post, but the basic gist of a Zone Greeter is that they are responsible for a certain section – or zone – of the auditorium. They are embedded sans name tag, so it feels a little more organic. But their one job is to talk to people they don’t know, and then hand them off to people they do know. This helps circumvent a common complaint about most guest services teams, which is “Once I got past the official gauntlet of greeters, no one spoke to me.” Are the Zone Greeters official? Yep. But they’re also a catalyst to help foster organic relationships. (read more about Zone Greeters)

Provide end-of-service amnesty. This one is my favorite, because this one would personally benefit me the most. I can’t tell you the number of times I’ve sat through a service beside someone that I think I may know but not 100% sure I know. If we do the traditional turn-and-greet, I have a chance to talk to them, but I have to play the “Hey there…buddy” game because I don’t know their name. So instead of forced fellowship mid-service, provide the opportunity for fellowship post-service. The speaker on stage can say something like this: “As our service comes to a close, I want to encourage you to take an opportunity to speak to each other after we dismiss. Let’s just all admit something together: the chances are good that you have been sitting beside someone this morning…maybe you’ve sat by the same person for the last several weeks…and you have pretended you know their name but you actually don’t (this will bring laughter). So this is amnesty morning. Just talk to someone beside you as we close this morning.” The extreme introverts can still beat a path to the door. But for folks like me, it gives me the chance to turn and say, “You know he was talking about me, right? Tell me your name.” Plus, it’s the end of service, so it creates space to have a longer conversation, swap contact info, or even make plans to grab lunch.

Do you have alternative suggestions for the turn-and-greet? Comment below.